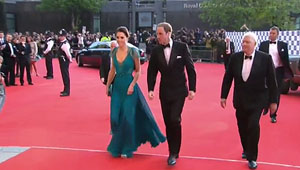 The Duke and Duchess of Cambridge attended Our Greatest Team Rises, a black-tie function at the Royal Albert Hall, with the Duchess wearing a teal Jenny Packham dress, accessorized by Jimmy Choo Vamp sandals. Her hair—in a chignon—was styled by the Richard Ward salon in Chelsea.
The royal couple were greeted by Lord Moynihan, chairman of the British Olympic Association. A pre-dinner reception saw them meet numerous athletes and fellow Olympic and Paralympic ambassadors, while the event itself was hosted by Davina McCall and John Bishop.
Those attending, based on the interviews below, felt that the couple’s presence lifted the profile of the event.
Prince William cracked a number of jokes, featured in the second video.
Take That and The X Factor’s Gary Barlow performed at the event.