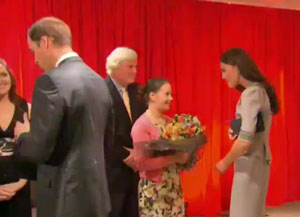 The Duke and Duchess of Cambridge, about to celebrate their first wedding anniversary, attended a red-carpet screening of African Cats at the BFI Southbank in London yesterday.
The screening of the documentary raised funds for conservation charity, Tusk Trust, of which Prince William is patron.
The Duchess wore a grey Matthew Williamson dress.
The film focuses on a pride of lions and a family of cheetahs in a Kenyan reserve. It is narrated by Sir Patrick Stewart. Keith Scholey and Alastair Fothergill directed.
It is released in the UK and Ireland on Friday.