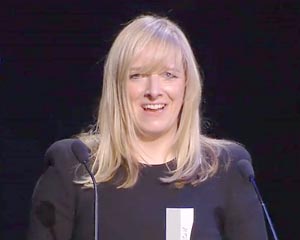 Above Sarah Burton on stage after accepting her Designer of the Year Award from UK First Lady Samantha Cameron.

Sarah Burton of Alexander McQueen is the Designer of the Year, it was announced at the British Fashion Awards last night.
Burton has been riding high in the media, for succeeding McQueen and retaining much of his ﬂavour, and for her work on the Duchess of Cambridge’s wedding gown this year.
A new award, the New Establishment Award, recognizing a movement in British fashion, was won by Christopher Kane.
Sam Gainsbury of Gainsbury and Whiting won the Isabella Blow Award for Fashion Creator. Gainsbury was behind the Savage Beauty exhibition, which the British Fashion Council states was ‘widely recognized as the most successful fashion exhibition in the world.’
Stella McCartney won the Red Carpet Award, while Victoria Beckham took home the Designer Brand Award for the growth and recognition of her label.
Emerging talent awards went to Mary Katrantzou for womenswear, Tabitha Simmons for accessories, and Christopher Raeburn for menswear.
Kim Jones, now at Louis Vuitton, won the Menswear Designer Award. Stella Tennant won the Model Award, her campaigns this year having included Zara, Reed Krakoff, Etro, Chanel and Céline.
Accessory Designer of the Year was Charlotte Dellal for her footwear label, Charlotte Olympia.
As previewed earlier in Lucire, Sir Paul Smith won the Outstanding Achievement in Fashion Award.
The British Style Award, voted by the public, went to Alexa Chung, as the individual who best embodies the spirit of London and serves as its fashion ambassador.
The Awards were hosted by George Lamb and Lauren Laverne. The audience included BFC ambassador Samantha Cameron, Kate Moss, Victoria Beckham, Kate Hudson, Colin Firth, Olivia Palermo, Josephine de la Baume, Marc Jacobs, Lady Harlech and Alexa Chung.
The BFC has worked with Save the Children this year, with MAC, Toni & Guy and Vodafone sponsoring this year’s awards.
Videos of many of the winners, red carpet footage and interviews with Olivia Palermo, Marc Jacobs and Henry Holland can be found below.

From the red carpet