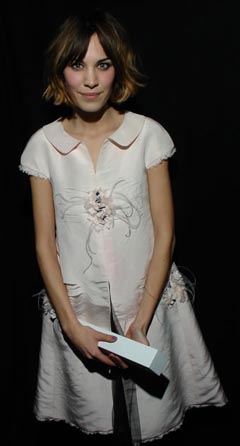 Above Alexa Chung, in Chanel, after winning the 2010 British Style Award.

The British Style Award is now open to public voting, raising funds for Save the Children.
The award goes to the person ‘who most embodies the spirit of London and is an international ambassador for London as a leading creative fashion capital,’ say the organizers.
Last year, Alexa Chung won the prize. She is among the nominees this year, along with Adele, Florence Welch, Stella McCartney, Lara Stone, Victoria Beckham, Emma Watson, and Vivienne Westwood, among others.
Both Vodafone, as a sponsor, and the organizers of the British Fashion Awards, are encouraging voters to donate to Save the Children, either through its Just Giving web page, or Vodafone’s Just Text Giving. Texters can send an SMS message with the code BFAS99, followed by the donation amount, to the number 70070 (e.g. text BFAS £5 to 70070 if one wishes to give £5).
Voting closes at midnight on November 9. Winners will be announced on the evening of November 28 at the Savoy.