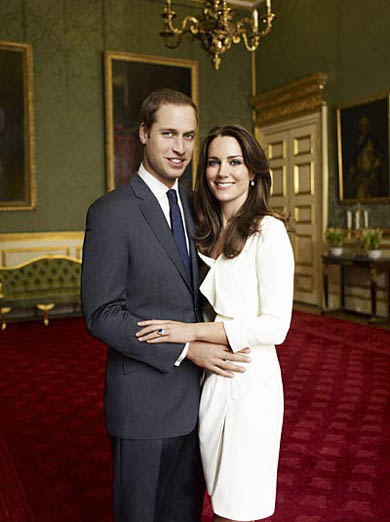 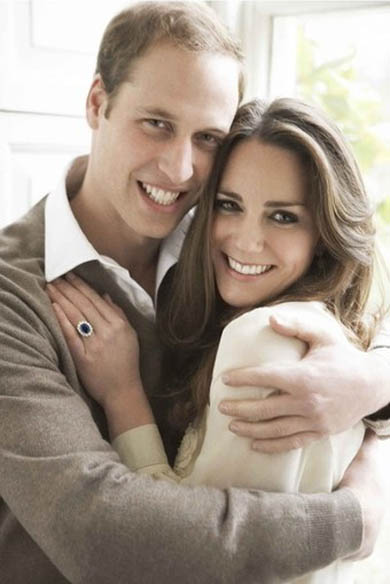 Mario Testino has photographed HRH Prince William and his ﬁancée Kate Middleton in their ofﬁcial engagement portraits.
Testino was a personal friend of the Prince’s mother, the late Diana, Princess of Wales, and considered to be one of her favourite photographers.
It was Prince William who made the request of Testino, who shot the couple at two locations.
The couple opted to release two images: one formal and one informal. The former, in the Council Chamber at Clarence House, show Miss Middleton in a white Reiss dress from the autumn–winter 2009–10 collection, Links earrings and the engagement ring that belonged to Princess Diana.
HRH Prince William wears an outﬁt by Turnbull & Asser, consisting of a dark suit, blue tie and white shirt.
The latter portrait shows the couple by a window at the Cornwall Room at St James’s Palace in an embrace, with the Prince in a shirt and a grey Brunello Cucinelli jumper, and Middleton in a Whistles cream silk blouse, from the spring 2011 collection.
The jumper is believed to have been lent to Prince William by Testino.
Middleton did her own make-up for the shoot, while her hair was by James Pryce of Richard Ward.
The ofﬁcial images have been released by Buckingham Palace and will be syndicated for use on souvenirs to commemorate the Royal Wedding, scheduled for April 29 at Westminster Abbey.