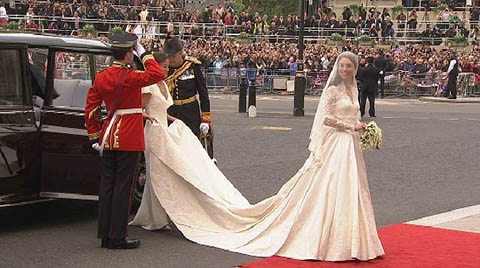 As predicted by many, and originally denied by the Alexander McQueen company, Sarah Burton was the designer of Kate Middleton’s wedding gown.
The choice of Burton stemmed from ‘its craftsmanship and its respect for traditional workmanship and the technical construction of clothing,’ according to an ofﬁcial statement.
It continued, ‘Miss Middleton wished for her dress to combine tradition and modernity with the artistic vision that characterizes Alexander McQueen’s work. Miss Middleton worked closely with Sarah Burton in formulating the design of her dress.’
The design is a homage to the Arts and Crafts movement. ‘Ms Burton’s design draws on this heritage, additionally giving the cut and the intricate embellishment a distinctive, contemporary and feminine character.’
The dress is made with ivory and white satin gazar. English lace and Chantilly lace have been used throughout the bodice and skirt. The skirt is meant to represent an opening ﬂower.
The bodice is narrow at the waist and padded at the hips; the back is ﬁnished with 58 gazar and organza-covered buttons fastened by Rouleau loops. The underskirt is made of silk tulle trimmed with Cluny lace.
Middleton’s veil is made of silk tulle with a trim of hand-embroidered ﬂowers, held in place by HM the Queen’s Cartier halo tiara, which was originally purchased by the Duke of York (later King George VI) for the Duchess (the Queen Mother) soon after its creation in 1936. It was presented to the then-Princess Elizabeth for her 18th birthday.
Her diamond earrings have been designed by Robinson Pelham, who also furnished bridesmaid Philippa Middleton with her pair.
The bride’s shoes have been hand-made by Alexander McQueen.
The cutting of the lace motifs for the dress and embroidery for the shoes were done by the Royal School of Needlework.
The bouquet was designed by Shane Connolly. It contains stems from a myrtle planted at Osborne House, Isle of Wight, by Queen Victoria in 1845, and a sprig from a plant grown from the myrtle used in the Queen’s wedding bouquet of 1947, says the ofﬁcial site.