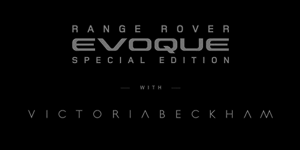 Tata Motors’ off-road brand, Land Rover, will unveil the Range Rover Evoque Victoria Beckham Special Edition on Sunday as part of the events tying in to Auto China, the Beijing Motor Show.
The event will take place at the Central Academy of Fine Arts (CAFA) on the eve of the motor show.
Land Rover has issued the video teaser below.
Beckham was appointed creative design executive for Land Rover in July 2010, which Lucire covered at the time. This is the first collaboration under the arrangement to bear Beckham’s name and will be sold as a special edition.
Beckham, who won the Designer Brand of the Year award at the 2011 British Fashion Awards, collaborated with Gerry McGovern and his Land Rover Design team over the last 18 months.