To commemorate Gucci’s 90th birthday, Fiat has unveiled the 500 by Gucci on the ﬁrst day of Moda di Milano.
The car will also be shown at the Salon de Genève from March 3 to 13, in a dedicated Gucci pop-up store.
In other motoring- and anniversary-related news, Jaguar has commissioned a book to commemorate the 50th anniversary of the iconic E-type.
E-type: Fifty Years of a Design Icon has the development story, period images, competition information, and interviews with Sir Jackie Stewart, Martin Brundle, Sir Stirling Moss and Jay Leno.
This is the ofﬁcial book commemorating the anniversary.
The publisher is taking orders in advance of the March launch, with the VIP version retailing for £299, available on a ﬁrst-come, ﬁrst-served basis.
For the standard hardcover edition, priced at £49, Amazon is taking orders both at the US and the UK sites.
The VIP edition is individually numbered and is hand-bound in a reproduction of the E-type’s leather upholstery, and its own slipcase.
At its 1961 launch, the E-type was the fastest production car in the world, capable of 150 mph. Celebrity owners included George Best, Brigitte Bardot, Tony Curtis and Steve McQueen.
Jaguar says the book has previously unseen material from the Jaguar Heritage archives and newly commissioned photography. 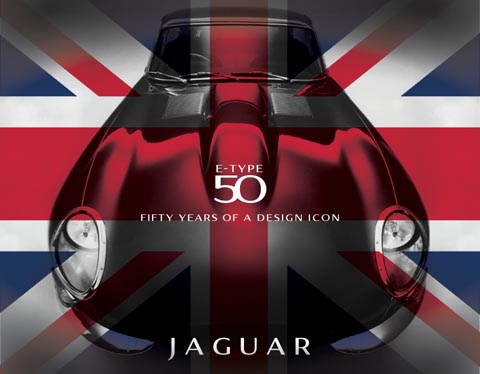