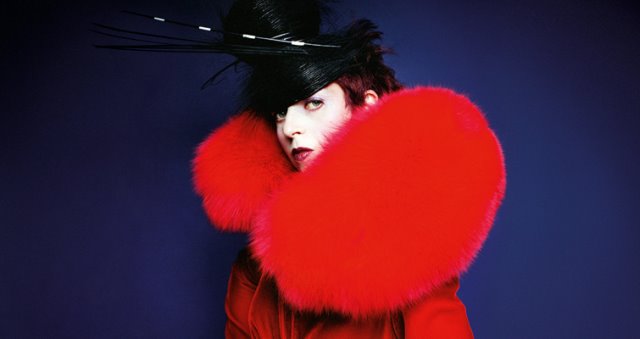 The exhibition, Isabella Blow: Fashion Galore!, opens today at Somerset House, London.
This marks the second time Lucire has covered an exhibition connected to the late editor and fashion patron. The earlier occasion, in 2008, saw curator Donna Loveday of the Design Museum look at Philip Treacy’s hats, and focused on the then Isabella Delves Broughton’s discovery of the designer. This second exhibition, with over 100 pieces, looks at Blow’s collection itself: it is her wardrobe, acquired by her friend Daphne Guinness, to stop it being sold at auction. Architectural firm Carmody Groarke designed the exhibition.
Guinness said, ‘This exhibition is, to me, a bittersweet event. Isabella Blow made our world more vivid, trailing colour with every pace she took. It is a sorrier place for her absence. When I visited her beloved clothes in a storage room in South Kensington, it seemed quite clear the collection would be of immense value to a great many people. I do believe that in choosing to exhibit them we’ve done the right thing—and that it is what she would have wanted. I am doing this in memory of a dear friend, in the hope that her legacy may continue to aid and inspire generations of designers to come.’
After Blow’s suicide in 2007, Guinness, who had been friends with her for nearly a decade, sought to preserve her legacy and established the Isabella Blow Foundation.
Many of the garments shown are styled in exactly the way Blow wore them. She was known to only wear work from designers she liked or admired.
A catalogue will be published by Rizzoli to accompany the exhibition, edited by Alistair O’Neil, who curated the exhibition with Shonagh Marshall, with essays by O’Neil, Marshall, Prof Caroline Evans, and Alexander Fury, with new photography by Nick Knight. Graphic Thought Facility has designed the book, which is priced at £40.
Blow began her career in the early 1980s as Anna Wintour’s assistant at Vogue. After she returned to London in 1986, she worked at Tatler, British Vogue, and The Sunday Times’ ‘Style’. In addition to Treacy, whom she discovered at his graduation from Central St Martin’s in 1990, Blow is also credited for discovering Alexander McQueen (at his graduation from the school two years later), Hussein Chalayan, Julien Macdonald, Sophie Dahl and Stella Tennant. She collaborated with photographers Steven Meisel, David LaChapelle and Sean Ellis.
The exhibition includes pieces from the designers she discovered, and is regarded as one of the most important private fashion collections of the era.
Film, recordings and projections at Somerset House take visitors back to the era, while miscellaneous items belonging to Blow, such as her Rolodex, are also on display.
Somerset House presents the exhibition in association with the Isabella Blow Foundation and Central St Martin’s. It runs from November 20, 2013 to March 2, 2014, from 10 a.m. to 6 p.m. daily, with a late night of 9 p.m. on Thursday. Some special hours apply over the Christmas and New Year period. Entry is £12·50, and concessions are £10 and £6·25 on Mondays.
The video below looks back at Blow’s life, and includes Alexander McQueen’s La Dame Bleue collection from spring–summer 2008, which he dedicated to his mentor.