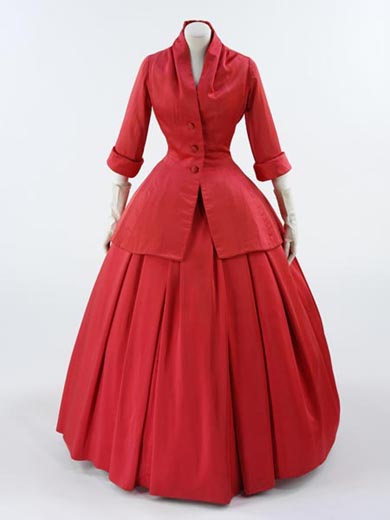 Above Zémire evening ensemble by Christian Dior, autumn–winter 1954–5. Cellulose acetate, with the skirt lined with layers of silk and net.

The Frist Center for the Visual Arts in Nashville, Tenn. is showing an exhibition entitled The Golden Age of Couture: Paris and London 1947–1957, from June 18 to September 12.
The highlight for the exhibition is this week, when former New York Post fashion editor Libby Callaway speaks to model Karen Elson about her experiences on the catwalk and ‘the art of wearing haute couture.’
The talk takes place on Thursday, June 24, at 6.30 p.m. and is free at the Center’s auditorium.
The Golden Age of Couture looks at the immediate postwar era with the launch of Christian Dior’s New Look in 1947, which sparked an era of creativity for couturiers. The exhibition was curated by the Victoria & Albert Museum in London. It has already appeared in the UK, Australia, Hong Kong and Canada. The Frist is the only US venue; Museums Shefﬁeld follows in 2011.
Highlighted designers include Dior, Cristóbal Balenciaga, Hubert de Givenchy, and Pierre Balmain, Hardy Amies, Charles Creed, and Norman Hartnell. Photography by Cecil Beaton, Richard Avedon, and Irving Penn appear in the exhibit.
Garments include a Givenchy blue cape (1957), identical to the one worn by Audrey Hepburn in Funny Face. A rare ﬁnd is a red version of Dior’s Zémire (1954, above). The bodice and long jacket with full length skirt, previously known only through archive photographs, were recently discovered in a cellar near the Seine and have been cleaned and repaired.
The end of the era in 1957 was marked by Dior’s death, with fashion moving from ﬁtting rooms and ateliers into boutiques.