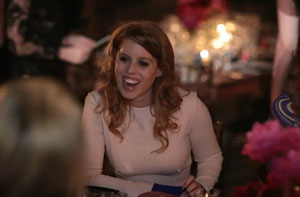 Earlier this week, the British Fashion Council, in association with Harper’s Bazaar UK and Selfridges, hosted Britain Creates 2012: Fashion & Art Collusion, celebrating the year in which London hosts the Olympic and Paralympic Games.
Britain Creates brings together fashion and contemporary visual art, showcasing collaborations between luminaries such as Matthew Williamson and Mat Collishaw, Hussein Chalayan and Gavin Turk, Giles Deacon and Jeremy Deller, and Paul Smith and Charming Baker. Their pieces will be on display at the Victoria & Albert Museum from July 6 to 29, while an installation at Selfridges will show in July and August.
Below are videos from the gala at the Old Selfridges Hotel. In attendance were HRH Princess Beatrice in Roksanda Ilincić, Eliza Doolittle in Alexandra Kapsala, Matthew Williamson, Anya Hindmarch, David Bailey, Holly Valance, and Florence Welch.
The BFC and Harper’s Bazaar have been working with the Mayor of London, LOCOG and others on Britain Creates, part of the London 2012 Festival, which runs from June 21 to September 9.