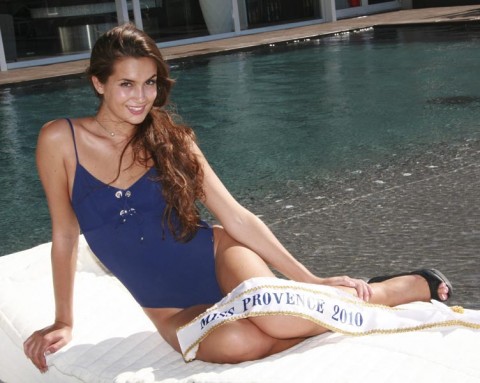 Above Barbara Morel, with her publicity photograph from Miss Provence, as she entered Miss Nationale last year.

So much for the globalized world and instant news: even though the French gossip machine has been talking about Spurs guard Tony Parker (former husband of Eva Longoria) and Miss Nationale Barbara Morel for about three weeks, news of it only hit an Anglosphere tipping-point in the last 24 hours.
Morel, as Lucire readers know, is the ﬁrst Miss Nationale, the winner of a Miss France-rivalling pageant set up by veteran Geneviève de Fontenay after a falling-out with the older competition.
If de Fontenay was worried that her pageant wasn’t getting as much attention as the Berlusconi-owned Miss France contest, and its latest winner Laury Thilleman, then her concerns are over. Speculation over whether former Bouches du Rhône student Morel and basketballer Parker are an item—thanks in good part to the success of Desperate Housewives in France—has helped fuel the press, in a country where beauty pageants are still big business.
If it were not for the Tony Parker effect, the tabloids and celebrity magazines would have just tried to outdo each other with party photos of the beauty queens.
De Fontenay, according to one gossip rag in France, has not objected to the relationship, even if Miss Nationale was set up on what was supposedly time-honoured traditional values. But, this is France, and a high-proﬁle romance surely counts as tradition?