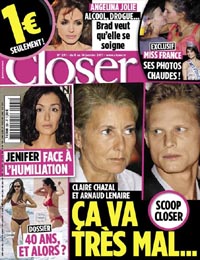 In a move which will help boost Geneviève de Fontenay’s Miss Nationale pageant’s standing, French gossip magazine Closer has published photographs of Miss France 2011, Laury Thilleman, kissing another woman at a party organized by the business school where she studies.
Thilleman had earlier stated that she had nothing to be ashamed of, but the photographs will likely cause a minor scandal in France.
De Fontenay had set up her rival pageant after disagreements surrounding moral standards with the Miss France team. However, Barbara Morel, the newly crowned Miss Nationale, was herself caught in a photographic scandal in December thanks to the same magazine.
Closer had published images of Morel, then 17, kissing her ex-boyfriend, and in another image, holding what could be—but might also not be—a cigarette.
Morel dismissed the photographs as perfectly normal, calling them ‘harmless’ and noting that she had already put them on her personal blog.