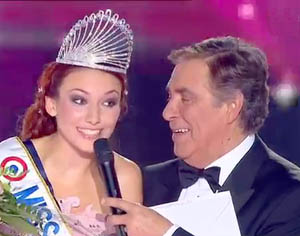 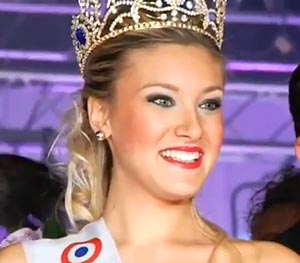 Top Delphine Wespiser with her ﬁrst words upon being crowned as Miss France: ‘36-37’, the number for France’s Téléthon. Above Christelle Roca, Miss Prestige National 2012, crowed at Divonnes-les-Bains in Ain.

While Sunday was a record day for trafﬁc this year at the Lucire website, thanks to the Miss France pageant, Monday remained relatively healthy thanks to the rival Miss Prestige National, founded by Geneviève de Fontenay.
But it’s interesting to note just how much of the public interest each of the pageants has.
It is unfair to give direct comparisons between the two. Miss France enjoys a live telecast in France and public voting from the TV audience. Miss Prestige National might make French news, but lacks the terrestrial network backing of its rival. Early photographs of both Delphine Wespiser and Christelle Roca were passable and fuzzy respectively, making it hard to give the second pageant the sort of visual prestige that its name implies in this publication.
So it is no surprise when I say that for both the 2011 and 2012 pageants, more people read our articles about the Miss France winner.
However, the gap was much larger this year in terms of reader numbers.
It’s our policy not to give out exact reader numbers—plus they are constantly changing for these particular articles anyway—but the ratio between readers of the Miss France and Miss Nationale 2011 pieces is currently 2·7. It would have been roughly the same in December 2010.
Through the past 12 months, Miss France 2011 Laury Thilleman has enjoyed more press than Miss Nationale 2011 Barbara Morel, though some media have grouped the two together in articles. Morel herself became better known for her personal relationship with basketballer Tony Parker, former husband of actress Eva Longoria, than making up for any lost proﬁle.
However, the 2012 pageants have the ratio at 8·6. In other words, nearly nine times as many people were interested in Miss France as than were interested in Miss Prestige National. Other than the home page and sectional pages in Lucire’s online edition, no other web page has had as many readers in the past few years.
One factor at play was that this year, we had the Miss France 2012 results as they came to hand through the wire services, whereas last year, there was a delay. But even halving the ratio—and that is being particularly generous to the newer pageant—we are still looking at 4·3.
These stats might help the organizers of the newer pageant look at why they haven’t done as well for the 2012 edition.
One logical place to lay blame is the eleventh-hour name change. Until November 2011, and despite a trade mark opposition, de Fontenay had stayed ﬁrm and refused to change the name of the pageant. It was only when the legal noises got too loud, both from Miss France owner Endemol and prior Miss Nationale trade mark registrant Michel le Parmentier, that the organizers, sans Mme de Fontenay, hurriedly retitled their pageant.
It’s also not helped by non-Francophones searching for the wrong name. Based on searches in Duck Duck Go, Google and other search engines, Miss Prestige Nationale (with the adjective in the feminine form) outnumbered the correct Miss Prestige National here, which would have limited the number of hits we had for the search term. Granted, many of our readers would not have been French—having said that, on Sunday and Monday, we noticed that there was a nice jump from l’Héxagone.
One big difference may be down to the absence of Geneviève de Fontenay herself, who, in order to save the pageant, stepped down. Endemol had cited a non-compete clause that prohibits la dame au chapeau from running a rival pageant until December 2013. Much of the news labelled la guerre de Miss was fuelled by interest in de Fontenay, herself an iconic ﬁgure in France thanks to her decades-long involvement in the original Miss France. The committee that runs Miss Prestige National has no high-proﬁle head that has caught the public’s imagination.
Even if you look at a non-French publication like Lucire, much of the coverage is tied to de Fontenay. Without the “battle of the pageants”, Miss Nationale and its successor would not have had the same level of coverage. The public enjoys a story that has a personality, and who better than a pageant director who felt so embittered with the direction of the one she sold that on principle she began another? You almost want to see the underdog win.
It is hard to say how 2012 will pan out for the newer pageant. Given the sort of TV audiences Miss France commands—typically in the region of a 40 per cent share—the French have quite the appetite for beauty pageants. There is, in other words, plenty of room for two without there being conﬂict, just as Miss World and Miss Universe occupy the same space in countries as small as New Zealand. They coexist amicably most of the time.
France can cope with two, but it seems Miss Prestige National needs a ﬁgurehead, perhaps its own Sylvie Tellier (a former Miss France now heading the senior pageant) to be its face, with the endorsement of de Fontenay.
When the 2013 pageant rolls around again, there can be another media frenzy.—Jack Yan, Publisher