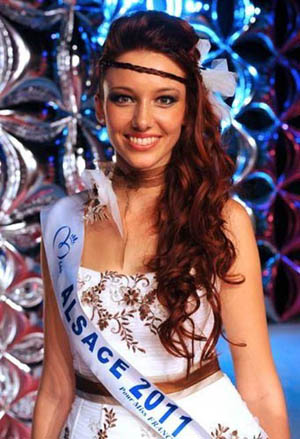 Miss Alsace, Delphine Wespiser, of Kingersheim, has been crowned Miss France 2012 tonight.
Wespiser, 19, at 1·75 m (5 ft 7½ in), is a management student with interests in eastern and flamenco dancing, and enjoys painting.
The redhead was crowned at the parc des expositions de Penfeld in Brest, ultimately chosen by a live television audience on TF1.
She was chosen after the ﬁnal ﬁve were identiﬁed by a panel of judges, led by veteran actor Alain Delon.
Wespiser succeeds Laury Thilleman and is the 65th Miss France.
Her ﬁrst words upon crowning were ‘36-37’—the number for Téléthon, urging viewers to donate.
Miss Réunion, Marie Payet, and Miss Pays de Loire, Mathilde Couly, were second and ﬁrst runners-up respectively.
Miss France 2012 comes just before its rival competition, now renamed Miss Prestige National, created by former Miss France director Geneviève de Fontenay.
Miss Prestige National will be chosen on Sunday at the Casino in Divonne-les-Bains.