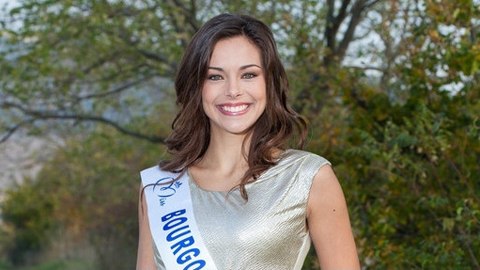 Miss Bourgogne, Marine Lorphelin, is Miss France 2013, succeeding Delphine Wespiser.
Lorphelin, 19, hails from Charnay-lès-Mâcon. She is 1·76 m tall (5 ft 9 in).
She is in her first year of medicine in Lyon. Her interests are art, painting and fashion. She is a regular gym-goer.
Lorphelin was originally crowned Miss Bourgogne (Burgundy) on September 29 at the parc des expositions de l’Eduen. A teary-eyed Lorphelin tonight became the 66th Miss France on live television.
Runners-up were Miss Tahiti, Miss Nord Pas-de-Calais and Miss Martinique.
The 33 contestants have been together since November 23. The final saw them wear up to 10 different outfits, including a replica of the Guy Laroche dress from Le grand blond avec une chaussure noire (1972). There was a series of tableaux paying tribute to actresses such as Brigitte Bardot, Catherine Deneuve, Sophie Marceau, Meryl Streep, Marilyn Monroe and Natalie Portman, with a final featuring a couture dress in homage to Grace Kelly. An earlier swimwear segment had a James Bond theme, paying tribute to Ursula Andress.
This year’s competition was held at the Zenith in Limoges. Four thousand people were in the audience, with a larger audience watching live on France’s TF1. Guests during the telecast included actor Jamel Debbouze.
The judging panel was composed of screen legend Alain Delon, Mireille Darc, former model Adriana Karembeu, Nikos Aliagas, Miss France 2006 Alexandra Rosenfeld, Olympic swimmer Camille Muffat, and Frédéric Diefenthal. Viewers account for half of the vote in choosing the five finalists out of the 12 semi-finalists the jury selected.
The final 12 were Miss Bourgogne, Miss Pays de Loire, Miss Martinique, Miss Roussillon, Miss Nord-Pas-De-Calais, Miss Champagne-Ardennes, Miss Bretagne, Miss Provence, Miss Rhône-Alpes, Miss Picardie, Miss Tahiti et Miss Côté d’Azur.
Twenty minutes before midnight local time, they were then narrowed down to Miss Bourgogne, Miss Tahiti, Miss Nord-Pas-De-Calais, Miss Martinique et Miss Pays de Loire.
Wespiser, in her valedictory speech, says she was ‘ready to join the ranks of the former Miss [Frances]’ and that she was ‘proud to be part of this family.’
Miss Prestige National, the rival pageant founded by the former Miss France owner Geneviève de Fontenay, will have its pageant on Monday night, with a jury chaired by Christiane Lillio. De Fontenay has been to court this year over her non-compete clause but insists she is merely a ‘guest of honour’.