December is a big month for us when it comes to covering beauty pageants, with news of the Miss France telecast traditionally our most-read story of the year on the Lucire website.
There has been slightly less of the “battle of the pageants” scandal in France this year, with Geneviève de Fontenay, la dame au chapeau, in to court fighting a non-compete clause after setting up a pageant to rival Miss France, which she had run for decades before quitting.
Endemol, which bought the rights to the Miss France pageant, alleges that de Fontenay is involved in the planning of her Miss Prestige National pageant (‘directly or indirectly’), but de Fontenay insists that she is merely a guest of honour. She granted an interview to News de Stars today, keeping the newer, smaller pageant in the limelight.
The only question marks at Miss France 2013, meanwhile, surround the fates of Miss Corsica, Miss Tahiti and Miss Limousin, who had posed in photographs that might be considered erotic before their regional wins—but pre-pageant incidents like this are not out of the ordinary.
Sylvie Tellier, a former Miss France and the chair of the pageant committee, as well as executive director of the Miss France company, says the contestants had signed a declaration that they had never posed for erotic material. 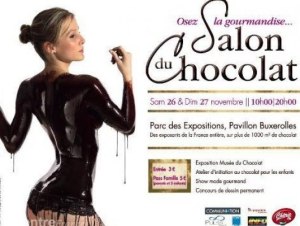 Miss Corsica, Louise Robert posed for lingerie advertisements; Miss Limousin, Sandra Longeaux, appeared on a poster for a chocolate fair where she appears coated with chocolate (left); and Miss Tahiti, Hinarani de Longeaux, posed wearing only a blue sheet in front for a tourist calendar.
Tellier says the committee will meet on Thursday, but warns that the context of the photos is irrelevant.
The reigning Miss France, meanwhile, Delphine Wespiser, has appeared in a promotion for the Disney–Pixar film, Brave (Rebelle in France), to see what it would be like to live the life of the lead character, Merida, in the highlands of Scotland. She has a number of routes she would like to explore after handing over her crown this weekend: to look at TV production on a show about animals, promote her home region of Alsace, or help with corporate events for the Miss France pageant.