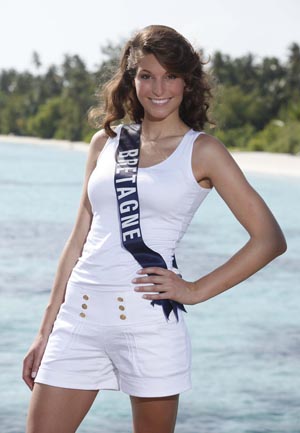 Miss Bretagne, Laury Thilleman, has won Miss France 2011, it was announced at the Zenith at Caen last night.
The popular pageant, hosted by veteran actor Alain Delon, was broadcast live on TF1 and was estimated to have attracted eight million viewers.
Thilleman was born on July 30, 1991 and is 1·78 m (5 ft 10 in) tall. She had been crowned Miss Bretagne in Pontivy on October 26.
She is currently studying management at business school, but plans to work in audiovisual communications in the future. She plays volleyball and says she has a passion for surﬁng.
Thilleman is the ﬁrst winner from Bretagne for 49 years.
Thilleman succeeds Malika Ménard, and will represent France at Miss Universe.
This year’s pageant was marked by the emergence of a rival event fronted by former Miss France director Geneviève de Fontenay. The new pageant, Miss Nationale, takes place on Sunday.