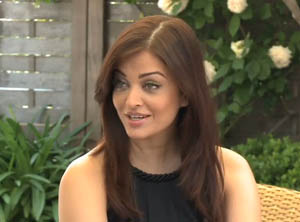 Aishwarya Rai overtook Gong Li yesterday as being the most-searched celebrity on Lucire, so here’s a treat for all fans of one of the world’s most beautiful women: a one-on-one interview.
Jonathan Ross is again the interviewer.
Rai talks about feeling ‘at home’ at Cannes, thanks to her frequency of visits, and the honour of being the ﬁrst Indian jury member at the Festival de Cannes.
Ross asks an excellent question about cultural references in Indian ﬁlms and Indian movie-going habits, both of which are handled with aplomb by the 1994 Miss World.
The actress announced earlier today at the Majestic Beach Pier her new ﬁlm, Heroine, produced by Ronnie Screwvala and to be directed by Madhur Bhandarkar.
The new ﬁctional ﬁlm is ‘entertaining, daring, emotional, shocking, glamorous, scandalous behind-the-scenes account of the reality behind the world of glitz and glamour that our stars inhabit.’