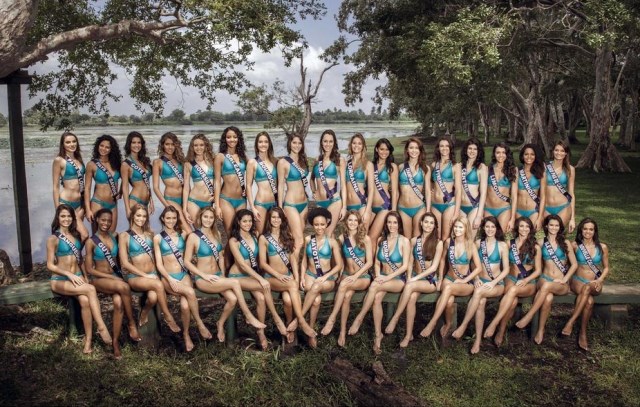 Above The 33 contestants for Miss France 2014 in swimwear.

Without an active guerre de Miss being played out in front of the French media, the proceedings seem a bit quieter for Miss France 2014.
Now that Miss France and its former director, Geneviève de Fontenay, have settled their legal dispute, with de Fontenay’s rival pageant, Miss Prestige National, taking place in January, French media have focused more on the smaller things. In the lead-up to the Miss France final on December 7 in Dijon, they have reported that its current CEO, Sylvie Tellier, has said that it was highly unlikely de Fontenay would ever be back.
Meanwhile, Miss France host, Jean-Pierre Foucault, made a remark about the host city that was instantly slammed on the social networks—after which he had to apologize.
Foucault had said that he had not planned to sleep in Dijon because he did not want to find himself ‘waking up in Dijon’.
The only thing that seems to have been controversial was the involvement of the Miss France jury chairman, veteran actor Alain Delon, in right-wing political activity. Delon was replaced by Québecois singer Garou.
There is some speculation over the reigning Miss France, Marine Lorphelin, and what she might do after her reign ends on the 7th.
A medical student, Lorphelin may return to university, though her predecessors tended to wind up on TV shows, including Sophie Thalmann, Malika Ménard et Laury Thilleman, appearing on the likes of Splash and Danse avec les stars (the French version of Strictly Come Dancing). French magazine Closer notes that one of the few exceptions is Tellier herself, who won the pageant in 2002.