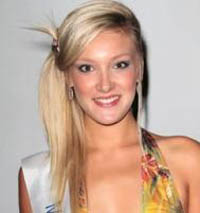 Less than a day after the crowning of Delphine Wespiser as Miss France 2012, rival pageant Miss Prestige National has crowned Miss Cerdagne-Roussillon, Christelle Roca (left), as its winner.
Part of France’s ongoing “battle of the pageants”, Miss Prestige National was originally set up by former Miss France director Geneviève de Fontenay. Last year, it was called Miss Nationale.
A legal challenge by Miss France’s owner Endemol, and a trade mark dispute with Michel le Parmentier, saw de Fontenay withdraw from her new pageant under a non-compete clause, and a hasty renaming in the last month.
Miss Prestige National took place in Divonnes-les-Bains in Ain, succeeding Barbara Morel, who was catapulted into the international press for her connection with basketballer Tony Parker.
Roca, 20, is 1·77 m (5 ft 10 in) tall, is studying real estate, has lived in Perpignan, and was elected in Saillagouse in the Pyrénées-Orientales.
Maud Schatteman, Miss Artois-Cambresis-Hainaut, was ﬁrst runner-up; Jessica Le Bleis, Miss Bretagne, was second runner-up.
The judging panel was chaired by journalist Henry-Jean Servat.