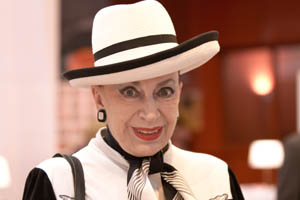 Miss Nationale 2012 will proceed on December 4, Le Figaro reports this morning, but without the direct participation of its founder, Geneviève de Fontenay (left), who was found by an arbitrator on November 7 to have breached a non-compete cause with Miss France when she set up her new pageant.
A committee of a dozen regional pageant organizers met in Paris yesterday to decide the fate of the national ﬁnal.
The ﬁnal will take place, reports the newspaper, on the originally scheduled date in Divonne-les-Bains in Ain.
Says de Fontenay, ‘If the regional committees are able to carry out the ﬁnal without me, it is due to their respect for the contestants, ensuring their dreams are not broken.’
One setback was that Miss Languedoc was cancelled.