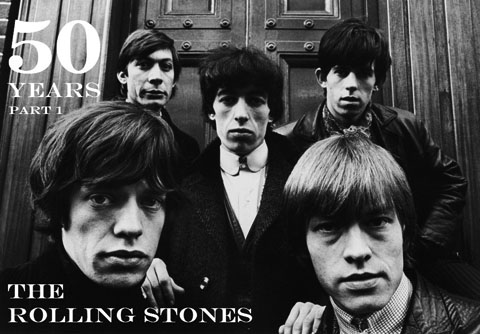 The Ebook People GmbH of Germany is planning a 2,000 pp. ebook at the end of June on the Rolling Stones, commemorating its 50th anniversary. The undertaking is expensive, and the company has moved to crowdsource its funding at Indiegogo.
The ebook will be released in two parts, each covering a quarter-century. It will feature with archive material that the firm is currently digitalizing, such as articles, audio files and images.
Respected music journalist Hanspeter Künzler, a contributor to Musikexpress, is editing the volume.
Donors are invited to head to the Indiegogo link at www.indiegogo.com/50yearsRollingStones.
One of the many interviews that will feature is shown below. This was conducted by Patrik Mallberg of the Interview People with Mick Jagger in 2003.

Paris in spring 2003, several weeks before the Stones kicked off their 2003 world tour.
There is music coming out of the lobby bar at one of the most famous hotels in Paris. One sign that we’ve popped into a very special place is the pricing of two long drinks and a club sandwich. You can almost afford an inner European flight for that money—and I’m not talking economy class. Three other German journalists have the pleasure to talk to Mick before I get to do it. And you never know: do they ask questions that will make him upset? Is he not going to be in the mood for any further conversation with a journalist? But it doesn’t seem so. Mick’s publicist, a very kind, friendly and funny guy takes me up the stairs to the first floor. ‘Don’t you wanna look into my bag in terms of security?’ I ask the gentleman. Walking half a metre before me he turns his head around, smiles and says, ‘Nope, we are not Madonna.’
Entering the room Mick appears to be so much smaller than you know him from TV appearances. Smiling, he welcomes me with a hand-shake and is ready to talk right away.

Hi Mick, what have been your career highlights?
Mick Jagger: It was great to getting the band going the very first time because you start to be successful for the first year or first couple of years and you’re like: all your little teenage dreams are, so to speak, coming true and you feel young and very ambitious and you’re starting to be successful—that feels really good, like getting your first job, doesn’t it?

What about the bad times?
Bad times. There are lots of bad times in a career, you know. The Rolling Stones have had a pretty long career and always there’s been good things and bad things. People die, you know. But I mean I guess most of the times it’s been pretty positive.

What would you do if you had the chance to use a time machine?
It’s quite interesting, you know. Do you ever read history books about ‘What if?’ What if Napoleon had conquered Russia and then it wouldn’t be like … and so it’s interesting if you follow these books through to their logical conclusions but it’s not really interesting unless you can do that. You know it is easy for me to say: would have been nice if I had been a film director or a ballet dancer or an accountant? What would have happened? But you don’t know the answer.

Do believe in fate?
I don’t. But the problem is that your not completely in control of your life when you’re young.

Have you ever told your children to do or not to do something because of your experience?
You’re always telling and that’s what it is to do, it’s parenthood. What you do is giving parts of your experience to them. I mean, you don’t always save them from real life. Or you can use examples. That’s what you do with children all the time.

Someone once said: if you don’t advance, you’re dead. So, how far can you still advance after your big success?
You have to keep yourself from just repeating yourself. It’s very difficult to do in anything. Whether you’re a writer or a journalist or a painter. Especially the rock business is very narrow. It’s like a very narrow political party with very few views in it. And as soon as you’re striving it goes: ‘Oh no, wait a minute!’ If you do a rock show with 25 half-naked dancers, everyone goes, ‘Oh, no, but it’s awful, you can’t do that!’ So the confines of it are very narrow and it’s very hard to keep anything interesting going within the narrow confines. So there are many, many conventions that you have to keep up.

Do you think that bands these days also have the chance of becoming as big as the Stones are?
I think so. I mean the only thing is it’s been going longer as a musical form. So rock music as defined by, let’s say four blokes playing in a band, was quite new in the early ’60s. But now it’s 40 years old as you put it out. The whole idea and form is older now. So how many generations? Two? Three generations? So it’s like an old thing being handed down now. It’s probably more difficult to make such splash as it was, for that reason.

Do you have to do so much light show and other stuff on stage?
It depends where you’re touring. In the early ’60s where you were playing in theatres, people don’t do a tremendous amount of all that stuff. And it was going on in the ’60s. That’s where it all started, I mean there were a lot of that. But we’re going to play a theatre show that is very little, so in the Circus Krone show shouldn’t be much pyrotechnics. But if you’re playing in a bigger stadium, you gotta do something visual. You can’t just go on. That’s like a guitarist view of world.

Doesn’t that keep the attention away from the audience?
Yeah, but I think that really when you go to a big stadium show the people that go, the punters as we call them, are not really just going to hear some pristine music, it’s just a sort of all-round experience. It’s half-way between going to a football match and a music show. You’re really looking forward, you want something to enhance your experience visually. To amplify and enhance the experience you need a bit more than just the music. The thing is that musicians think that’ all the people want, but I don’t share that view.

Are you very extraordinary when it comes to choosing the hotel room or suite?
I don’t know, not really (laughs). It’s sort of silly. When I’m working I like to have certain things. When I’m not working I do not really care about them very much. But when you’re working you want certain things. I don’t like to have a noisy traffic too much because then I can’t sleep for the show. The problem is: when you’re working, you don’t want to sleep late because you want to be ready for a nine o’clock show rather than nine-to-five job. So I don’t like staying in the hotels that are noisy.

Are the hotel lobbies still as crowded with groupies as they used to be?
Well, some places are good. But it is not really where you look for your entertainment, to be honest.

What music are you currently listening to?
I don’t know, I listen to a lot of stuff that I bought when I was to see what’s in the store. The other day I bought some new records. I listen to some jazz. I mean I listen to everything to be honest. I’ve been to India, listened to a lot of Hindi dance music, it’s like pop here in England.