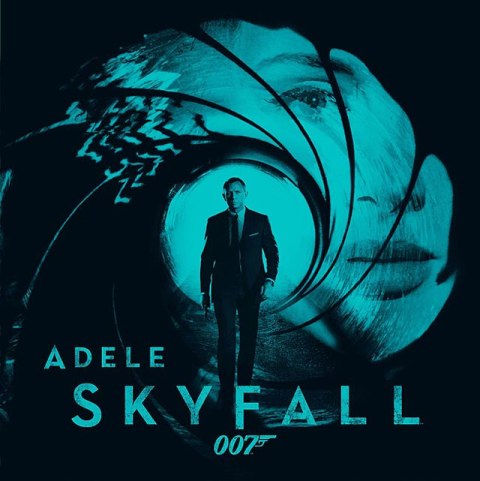 It had already been hinted that Adele would be singing the theme tune to the 23rd Eon Productions James Bond film, Skyfall, and a 90-second clip had been leaked earlier in the week before it was hastily deleted. The song has been officially released (at 0.07, seven minutes past midnight), shooting straight to the top of the Itunes chart.
Adele gives a performance that can fairly be described as Bondian: a soulful voice, with a 77-piece orchestra at Abbey Road Studios, re-creating a sound that the late John Barry would be proud of. Most of the song is classic Adele: she has injected her own style in to it, and it is only toward the end that there are echoes of Shirley Bassey with the singer holding a long note for the second syllable of ‘Skyfall’.
The theme song has been written by Adele with Paul Epworth (who has been behind hits for Lana Del Rey, Florence and the Machine, and Plan B), while the YouTube video has been created by Nick Chappell. While there are plenty of nods to Barry, Adele and Epworth have managed to get just enough modernity into it.
Adele released a series of Tweets discussing the song. She wrote, ‘There’s a lot of instant spotlight and pressure when it comes to a Bond song.
‘But I fell in love with the script and Paul had some great ideas for the track and it ended up being a bit of a no-brainer to do it in the end.
‘It was also a lot of fun writing to a brief, something I’ve never done, which made it exciting.
‘When we recorded the strings it was one of the proudest moments of my life.
‘I’ll be backcombing my hair when I’m 60, telling people I was a Bond girl back in the day, I’m sure.’
To celebrate James Bond today—50 years since the world première of Dr No—publisher Jack Yan has looked back at the cinematic character’s cars over the last 60 years, and just why the Aston Martin DB5 keeps creeping up in the film series’ history.
Skyfall is released in the UK on October 26.