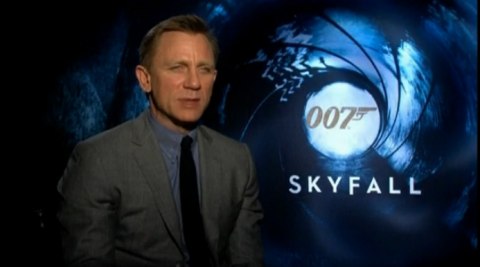 Daniel Craig, Dame Judi Dench and Javier Bardem have given interviews as the Skyfall promotion goes up a gear, less than two weeks before its UK release on October 26.
An advance screening took place in London on Friday, with some calling Skyfall the best Bond movie in the 50 years of the franchise.
Craig, on his third Bond film, says, ‘It’s more fun. It’s really rewarding. It’s still rewarding—I still get a huge kick out of it. There’s always a challenge. You kind of think that you know what you are doing and then you realize you don’t.’
Dame Judi recalls her start as M in Goldeneye in 1995, ‘We didn’t really know in a way what a furore it would cause to make M into a woman. I didn’t know really that at the time. I thought it was a wonderful part.’
Of the new film, the 23rd in the Eon Productions series, she says, ‘It’s wonderful for this to come out in the Jubilee year and in the year of the Games and everything because it is every essentially British, kind of flying the flag.’
Bardem, as villain Silva, believes it was the right time to take on the role: ‘You feel now is the right time and also based on the material and based on many other things, you go, it’s time for me, and of course it’s a great privilege to belong to a great James Bond movie.’
Early reviews include Robbie Collin’s in The Daily Telegraph, who wrote, ‘Mendes is unafraid to let the quieter dramatic moments breathe (a loaded conversation between Bond and Silva drew cheers at last night’s preview screening), and ace cinematographer Roger Deakins makes the wildly ambitious action sequences the most beautiful in Bond’s 50-year career.’
Peter Debruge writes in Variety: ‘Whatever parallels it shares with the Bourne series or Nolan’s astonishingly realized Batman saga, Skyfall radically breaks from the Bond formula while still remaining true to its essential beats, presenting a rare case in which audiences can no longer anticipate each twist in advance. Without sacrificing action or overall energy, Mendes puts the actors at the forefront, exploring their marvelously complex emotional states in ways the franchise has never before dared.’
Xan Brooks at The Guardian had some criticisms: ‘By this point, the makers of Skyfall have taken the bold decision to open Bond up—to probe at the character’s back-story and raise a toast to his relationship with M. Yet this touchy-feely indulgence proves to be a mistake, in that it paves the path to soft-headedness, nostalgia and (worst of all) jokey banter with Bond’s bearded old retainer.’
Kim Newman in Screen Daily notes, ‘The usual Bond formula finds the agent wrecking some villain’s scheme, but here Silva—Bardem hugely enjoys the chance to create an all-purpose monster character—is dismantling MI6 out of pique and the hero is in a corner. It’s distinguished from the Bournes by class and classiness—replete with Tennyson quotes and musings on lost Empire—and this manages to be elegiac and celebratory at the same time.’

One thought on “Video: Daniel Craig, Dame Judi Dench, Javier Bardem give their thoughts on Skyfall, as media praise it”