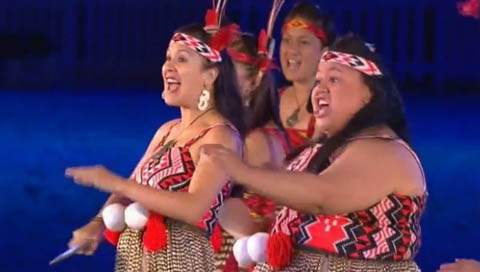 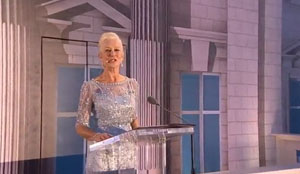 HM Queen Elizabeth II has attended the finalé of the Diamond Jubilee Pageant, a four-night event taking place at Windsor Castle to commemorate her 60-year reign as head of the Commonwealth, and her 250 state visits made during that time.
Celebrities included Dame Helen Mirren, Susan Boyle, Omid Djalili, Rolf Harris,¹ Il Divo and Joss Stone.
Reports indicate that some 600 horses and 800 dancers took part in the Pageant, with a live audience of 3,000.
Among the many international acts were 20 Māori kapa haka performers, led by Trevor Maxwell (Te Arawa). Other performers included Royal Canadian Mounted Police, and dancers from México and the Cook Islands.
Edited into a 90-minute special called The World Comes to Windsor, the show will be broadcast on ITV1 in June, and around the world.
The Queen, in a cream coat, was accompanied by HRH the Duke of Edinburgh, and the couple arrived in a horse-drawn landau. Other members of the royal family attending included the Duke of York, Princess Beatrice, the Duchess of Cornwall, Prince and Princess Michael of Kent and Princess Alexandra.

¹ Harris was jailed in July 2014 for 12 counts of indecent assault against young girls.