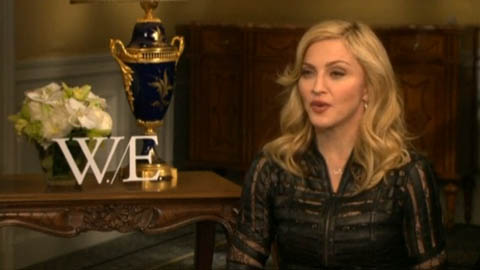 Singer-turned-director Madonna has revealed that she learned of the two Golden Globe nominations for her ﬁlm, W. E., when she woke up in the morning and checked her Blackberry ‘for exciting breaking news’.
‘I’m really proud that my movie was recognized in any category,’ she told ITN.
Abel Korzeniowski scored the ﬁlm, earning him a Best Score nomination. ‘I’m a huge fan of Abel … I’m happy for him,’ she said.
Madonna received one nomination for Best Original Song, ‘Masterpiece’, which plays over the ﬁlm’s credits.
The biographical ﬁlm on Wallis Simpson stars Andrea Riseborough as Mrs Simpson and James d’Arcy as King Edward VIII.
The UK première had taken place at the Empire in London’s Leicester Square in October, after showings at ﬁlm festivals in Venezia and Toronto.
Sir Elton John and Bernie Taupin were also nominated for Best Original Song (‘Hello Hello’, from Gnomeo and Juliet), along with Chris Cornell (‘The Keeper’ from Machine Gun Preacher), Brian Byrne and Glenn Close (‘Lay Your Head Down’ from I), and Mary J. Blige, Thomas Newman, Harvey Mason Jr and Damon Thomas (‘The Living Proof’ from The Help).
Korzeniowski ﬁnds himself in competition with Trent Reznor (the remake of The Girl with the Dragon Tattoo), John Williams (War Horse), Howard Shore (Hugo), and Ludovic Bource (The Artist).

4 thoughts on “Madonna learned of W. E.’s Golden Globe nominations when checking her Blackberry in the morning”