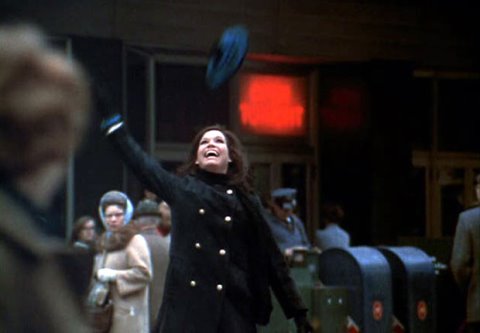 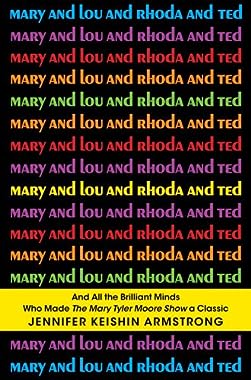 In the 36 years since The Mary Tyler Moore Show ended, we’ve had snippets of information here and there: TV specials celebrating various anniversaries, articles when the release of the disappointing Mary & Rhoda TV movie appeared, and retrospectives when Mary Tyler Moore herself was presented with a SAG award. But no one, till now, has put together a tome on how the show was created and its eight-year history.
Jennifer Keishin Armstrong’s Mary and Lou and Rhoda and Ted and All the Brilliant Minds Who Made The Mary Tyler Moore Show a Classic is the best researched book on the topic. Newly released by Simon & Schuster, Armstrong has talked to the surviving members of the cast and crew, including writer Treva Silverman, and producers and creators Allan Burns and James L. Brooks, as well as Moore, Valerie Harper, Gavin MacLeod and others. She has exhaustively researched period articles and even feminist conferences. But don’t expect a laborious effort to get through the 300 pp.: anyone with even a passing interest in television sitcoms, television history in general, recent American history or the media’s role in the development of feminism will find Mary and Lou and Rhoda and Ted an absorbing and entertaining read, tracing the origins of the show in the 1960s to the years after its final episode, told chronologically.
It’s hard to believe now just how revolutionary The Mary Tyler Moore Show was in 1970. It’s even harder to believe that it had a difficult gestation and plenty of doubt among network executives. CBS had expected it to flop after its 13-episode commitment, not take home multiple Emmys. Ed Asner could have walked away permanently after a bad audition. But it became a ratings’ winner, catching the smart, urban crowd, and the fictional Mary Richards became the first mainstream character to tell America that it was OK to be single, over 30, and independent.
Jay Sandrich’s style of directing is mentioned—he believed that actors should play to each other, rather than on stage in the theatre, performing to the audience. That, the live audience, and the use of film helped lend The Mary Tyler Moore Show a different style. The use of Evan-Picone as a sole supplier of Moore’s wardrobe also helped with realism: Mary Richards might repeat an outfit during a season, which a real working woman would. Brooks and Burns, in their own commitment to reality, sought out female writers, who were extremely hard to come by in the late 1960s and early 1970s, to give the show an authentic voice. The networks themselves had remarkably few women, with the few female executives who had broken the glass ceiling needing to leave their high heels outside the washroom so that their male colleagues knew they were inside.
Norman Lear’s remake of Till Death Do Us Part, called All in the Family, which proved more ground-breaking in pushing the envelope, is also mentioned more than just in passing. All of it is placed into the context of the social changes in the United States at the turn of the 1970s, making Armstrong’s book a particularly useful text, covering many bases.
We read about male fans writing to CBS angrily when it was implied that she had stayed over at a boyfriend’s, or even about how ground-breaking one scene was when Mary’s visiting mother, talking to her father, says, ‘Don’t forget to take your pill,’ to which both father and daughter replied, ‘I won’t.’
The team’s personal demons—Ted Knight had anxieties stemming from his slow rise to stardom, for instance, and the pressure put on Grant Tinker and Mary Tyler Moore’s marriage—are dealt with, and Armstrong successfully transplants the reader to the 1960s and 1970s as though the events were unfolding before us. The fact Mary Richards fought for equal pay but still accepted a lower rate did not endear the show fully to feminists, but The Mary Tyler Moore Show largely stayed true to not dealing with the issues of the day—rather, it would address them through character-driven plots, with one or two exceptions. On that note, it was quite unlike All in the Family, which would deal with racism or sexism head-on.
Mary and Lou and Rhoda and Ted is better than any DVD commentary or documentary so far produced on the show. With over 300 pp., it is the definitive reference on The Mary Tyler Moore Show, and to a lesser extent, its spin-offs. In terms of interest among American readers, we think it’s going to make it after all.

Armstrong has emailed Lucire with some of the events she has planned to promote her new book.
‘If you’re in New York, I especially encourage you to join us for MTM-related bar trivia to celebrate release week. There will be prizes—T-shirts, books, mugs, and free Entertainment Weekly subscriptions!’ she says.
‘So far I’ve got stuff planned for New York, DC, Chicago, Milwaukee, and LA, but I’ve still got more in the works, so if you’re somewhere else, please check my website for updates.’
Right now, those events are (please check her website for corrections and updates):

Jennifer Armstrong’s website can be found at jenniferkarmstrong.com, and her Twitter account is jmkarmstrong. Mary and Lou and Rhoda and Ted can be pre-ordered via Amazon at this link in hardcover, and at this link for Kindle. Release is May 7, 2013.—Jack Yan, Publisher