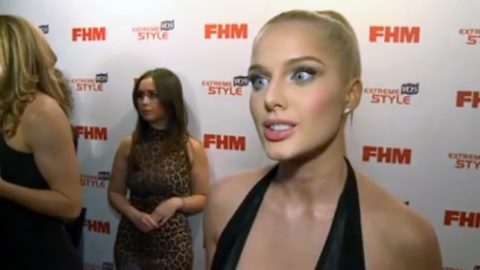 Actress Helen Flanagan (formerly of Coronation Street, where she played Rosie Webster) is the top-placed Briton on FHM’s Sexiest 100 Women list, thanks to reader votes. Mila Kunis topped the poll, voted via fhm.com, followed by Rihanna. Flanagan found herself in third place in the list of international celebrities.
Rounding off the top ten—and showing how FHM’s largely British reader base often voted in their own—were Michelle Keegan, Kelly Brook, Kaley Cuoco, Pixie Lott, Kate Upton, Cheryl Cole and Georgia Salpa. Tulisa Contostavlos just missed out on a top-10 placing, in 11th.
Our colleagues at ITN caught up with her in a very low-cut black gown at the party announcing the list, but presumably the volume prevented Flanagan from hearing the first questions posed to her.
Once tuned in to the interviewer, the 22-year-old Mancunian actress got through her questions more quickly.
Flanagan says that she has an obsession with Angelina Jolie and also regards eighth-placed Kate Upton as being sexy.
She also notes that she is ‘socially shy’ and would prefer a gentleman with manners to a ‘bad boy’.
Flanagan leapt from 47th place in last year’s poll.
The full list can be found at www.fhm.com/girls/100-sexiest-women.
Our second video features Emily Atack, Keeley Hazell, Jorgie Porter and Laura Whitmore.