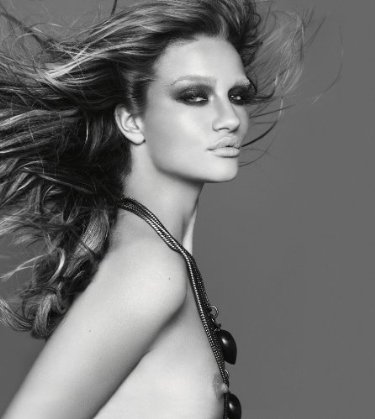 Above Model-turned-actress Rosie Huntington-Whiteley, on the cover of her book, Ten Times Rosie, photographed by Rankin.

Rosie Huntington-Whiteley has been named Sexiest Woman in the World 2011 by lads’ magazine FHM, knocking singer Cheryl Cole from the top spot. The accolade comes from readers, who vote in a poll.
Cole had been the magazine’s favourite for two years, with a million votes cast in the entire poll last year.
Last year, ‘By the poll’s close, no one was even on the same sexual continent [as Cheryl Cole] in terms of votes,’ said the magazine.
This year, however, Victoria’s Secret model-turned-Transformers 3 actress Huntington-Whiteley took ﬁrst place in the poll, not long after she had been voted Maxim’s number one on its 2011 Hot 100 list.
She replaces Megan Fox in the big-budget movies.
Katy Perry came second, and Rihanna third. Fox came fourth, followed by House’s Olivia Wilde.
Former Lucire model Brooklyn Decker came sixth, followed by Marisa Miller, Kelly Brook, Nicole Scherzinger and Sports Illustrated Swimsuit Issue cover model Irina Shayk.
Not that Cole would be terribly sore. Her gig as a judge on the US version of The X Factor was ﬁnally conﬁrmed today, after months of media speculation. And the Hoff—actor David Hasselhoff—has some advice for her.
Videos of all three stories are below, courtesy ITN.