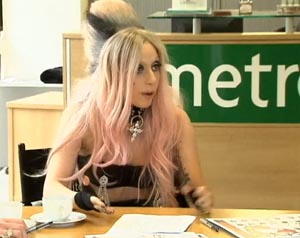 Lady Gaga, 2010’s (and 2011’s) mistress of publicity and fame, has stepped in to the editor-in-chief’s chair at Metro UK, as guest editor for a day.
The singer wore a choker, bra top and black pants as she took the editor’s chair. She then led an editorial meeting where she discussed LGBT and equality issues, hoping to provide a fairer tone in reporting, and the Japanese earthquake. She also wrote the editorial for the paper.
ITN provides a summary of Gaga over the past year, from the meat dress (was it that long ago now?) to her surprise concert at Cannes, with the plastic egg from the 2011 Grammy performance of ‘Born This Way’ in between.
Born This Way, the album, débuts next week.