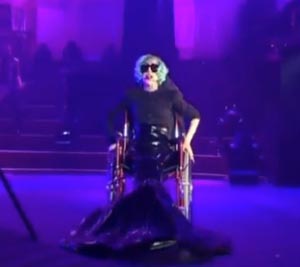 You can always trust Lady Gaga to deliver a headline—no wonder, since the singer–songwriter knows exactly how the fame machine works and what might get media talking about her.
For her Sydney audience, where she performed for 800 fans and 200 VIPs last night, Gaga came out half-way during her act dressed as her alter ego Yuyi the Mermaid, but in a wheelchair, signing ‘You and I’.
The wheelchair appearance courted column inches, both from disability groups and fans. Opinion appeared to be divided over the appropriateness of the wheelchair’s use.
She had previously used a wheelchair in the video for her song, ‘Paparazzi’.
Her Sydney Town Hall performance saw three new costumes designed by Versace and a custom-built set.
The video below also shows Gaga’s departure from her Sydney hotel in an oversized hat.