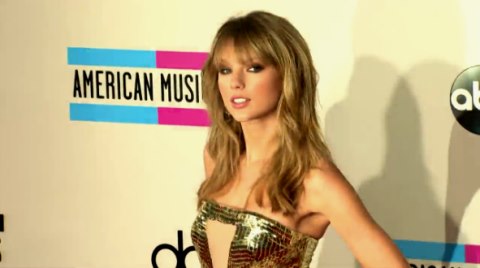 Looks like Lucire was on the pulse of the Zeitgeist again by talking about Taylor Swift in our latest print issue. The singer took home four awards at the 2013 American Music Awards at the Nokia Theatre in Los Angeles on Sunday: she was named Artist of the Year, Favourite Female Country Artist and Favourite Pop–Rock Artist, and won Country Album of the Year for Red.
Swift, 23, wore a strapless gold Julien Macdonald mini-dress from his autumn–winter 2013–14 collection and Jimmy Choo sandals, with jewellery by Lorraine Schwartz, while Miley Cyrus, who recently turned 21, played it safe after her controversial MTV VMAs’ performance with a white Versace tuxedo and Yves Saint Laurent shoes. She was accompanied by her father, Billy Ray Cyrus.
Receiving her Artist of the Year award, Swift said, ‘My lucky number is 13, and so far you guys have made 2013 the most magical year of my life so far.’
Best dressed, we thought, was Katy Perry, looking red-carpet perfect in Oscar de la Renta with an Olympia Le-Tan clutch.
Our video shows Swift, Cyrus, Perry, Lady Gaga (making an entrance on a fake stallion), Heidi Klum, and Kendall and Kylie Jenner.
Justin Timberlake took home three awards, One Direction won the Favourite Band, Duo or Group—Pop–Rock and Favourite Album—Pop–Rock for Take Me Home. Rihanna won the inaugural Icon Award, which she received from her mother.