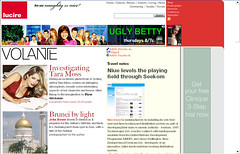 I know there were a lot of Ugly Betty advertisements on the Lucire site today, as the show premières for its new season on ABC in the US. Call it good targeting: those into fashion might be in to Ugly Betty, as many of our interns are. And I have heard of some admit that they expected to be in a Bettydom when they came here.
Still, seeing Ms America Ferrera in her Ugly Betty garb on the ads is more appropriate than the Dancing with the Stars ones that have been running here.
Like the movie adaptation The Devil Wears Prada (which I know is based on fact), I always found these screen representations a little far-fetched. I realize Ugly Betty is a pisstake on the fashion publishing industry, and our world merely provides a backdrop, but it just never captured my imagination as someone actually in there for real.
It’s less glamorous and if anyone did act like an arrogant prick, they would be outta here. Even if they looked like Vanessa Williams. The fashion industry is way too small and news of misbehaviour gets around more quickly than Casanova in a brothel.
So what is the reality? Mostly people looking into computers, but buoyed at the SweetChilli end with Laura’s son, Ryder, doing the cute things that three-month-olds do. It’s actually far, far nicer.