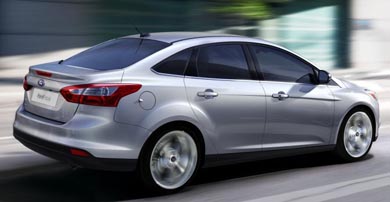 Ford has released details of its new Focus Mk III (or C346 in Ford-speak) at the North American International Auto Show (NAIAS) in Detroit, Michigan.
The new model, which will go on sale in Europe and North America in 2011 and Asia in early 2012, is a break from the existing C307 Focus sold in most of the world except the US and Canada (which sell an older-tech C170-based model). It will have Ford’s new Ecoboost engines with turbocharged direct injection, on an all-new platform.
The Duratorq diesel engines will be improved for the Mk III.
The cars are bigger than the existing model and are meant to début a new, more expressive Ford design language.
Both the hatchback and sedan shown at Detroit have the same rising glasshouse shared with existing European Fords, but the waistline is more ﬂowing, broken into front, centre and rear sections.
The engineering for the new Focus has been handled by the Ford team near Köln with powertrain development done in the UK.