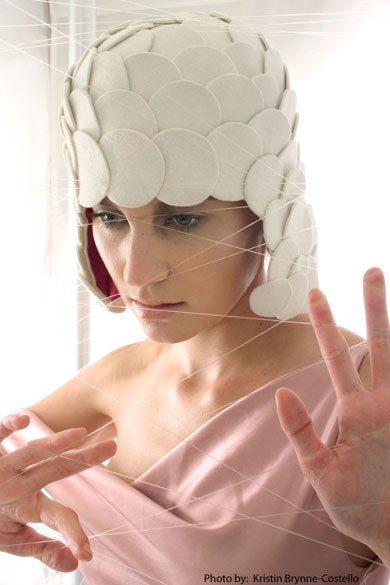 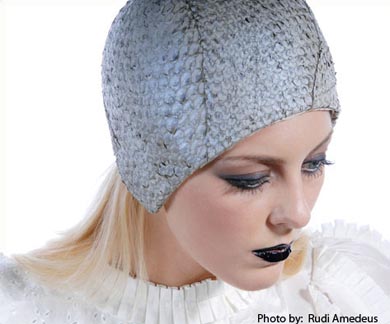 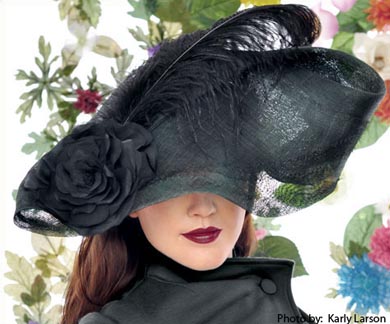 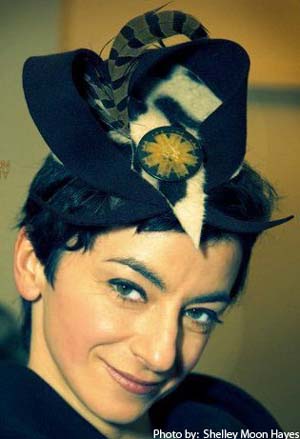 The name Jasmin Zorlu rings more than a bell within the élite hat community. This lady of avant-garde headwear is the essential ﬁnishing touch to ready-to-wear apparel. When you see a Zorlu original, you are immediately swept away by the intricate and whimsical æsthetic. She takes the idea of complex period-inspired hats and streamlines them into beautiful original pieces that you can wear with your daily ensemble. Of course, you’d have to already have style to wear these organic creations but, if you don’t, fret not, there’s room to learn in workshops or group classes taught by the designer herself.
When most children are asked the question, ‘What do you want to be when you grow up?’ you usually don’t hear the words, ‘I want to be a milliner,’ but when Zorlu responded to the question, it was clear that this was going to be the beginning of a rewarding journey and prosperous career.
Zorlu travelled quite a bit internationally as a child, which gave her wonderful experiences both culturally and artistically than the average little girl. After attending the University of Michigan, she found her calling as a milliner while studying art history. Afterward, Zorlu continued her education at the Fashion Institute of Technology (FIT) in New York where she studied hat design and shoemaking. While in New York, she continued to perfect her artistry by designing shoes for herself and fashion companies alike. She later moved to San Francisco, Calif., created a new line, and gained high recognition and new clientèle.
It’s no surprise how incredibly exquisite Zorlu’s work is, considering she’s had the pleasure to work with Woody Shelp and Rodney Gordon, masters of theatrical millinery. She’s also worked with Tracy Watts and other ﬁne milliners known worldwide, developing an extensive résumé. Her creative designs have an eclectic following: Zorlu sells and creates hats for Barney’s New York and Goorin Brothers. Her hats have also been commissioned by famed singer Erykah Badu and bought by Tom Waits and Neil Young.
In her millinery, she uses interesting objects like abalone shells, ﬁsh skin (leather), fruit bags, and even reclaimed cashmere. For the most part, Zorlu’s designs are inspired by the 1920s to 1940s. She said that her inﬂuence is from ‘the time between the wars. I am also heavily inspired by mediæval times and the mid-1700s.’
Seeing Zorlu in person is inspiration enough in her daily ensemble, wearing her infamous award-winning ﬁsh skin helmet hat with silver boots, evocative of Tibetan boots and ﬁreﬁghters.
As a hat wearer and collector myself, I appreciate the thought process behind Zorlu’s creations. They are not only inspiring but her designs are deeply moving. Her hats are like wearing your favourite scent: they ﬁll the room with a powerful statement, making the wearer feel chic, comfortable, and poised. As a result, her hats turn heads and give off an haute couture aroma that lingers even after one leaves.
The hats in her free-form blocked collections are also transformers, which can be worn in an array of ways. No wonder people are always being complimented when they are dressed stylishly and crowned with a Zorlu original.
Although Zorlu has received much deserving accolades for her pristine work, she remains humble. She has an altruistic quality about her that immediately stands out when she speaks about her passion for hat making.
So, what’s a typical day for this girl wonder? Zorlu spends her days designing high-volume hats for both a local and an international clientèle. She also plans to add a shoe line in the near future.
This is one woman who doesn’t mind spreading her élite hat education with others. She currently shares her passion for hats by teaching classes and holding workshops in the San Francisco and Bay Area, allowing anyone to learn special techniques and create their own design. Classes ﬁll up fast, so make sure you sign up quickly.
To acquire your very own Zorlu hat, go to www.jasminzorlu.com.