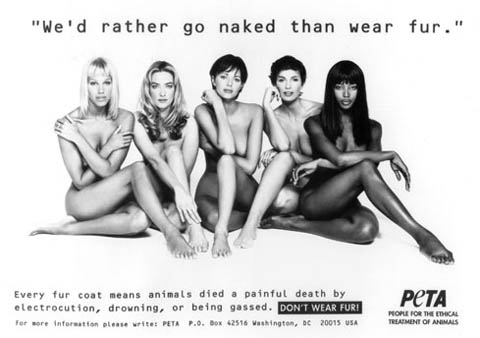 Above Remember this? Supermodel Naomi Campbell (far right) representing in a PETA ad that she would rather go naked than wear fur—a claim that she seems to have reversed on this year.

Soﬁa Hedstrom, in the Swedish daily Svenska Dagbladet, notes that the use of fur is on the rise.
Designers including Jean-Paul Gaultier and Karl Lagerfeld have been using fur in recent collections, spurred on by support from the likes of Anna Wintour and Carine Roitﬁeld. Models who once said they would rather go naked than wear fur are reversing their decisions.
Our thought: this won’t do, because there are better ways.
Stefan Engeseth, in his blog today, notes:

An animal that has no way to escape is a dangerous animal. …
I would argue that this is extremely bad taste, in a time when Mother Nature is threatened—what will [the] next fashion be? Dress in the latest polar bear? This arrogance will only make consumers believe that the fashion industry is shallow, with no understanding of ethics …
If supporters of animal rights feel that they are being given the ﬁnger, they could strike back in a way that could be nasty.
I am not advocating that we undertake desperate actions. But an animal that has no escape will, as a survival instinct, strike back. And there is a parallel there with what the fashion industry is doing …

He is right: in an age where we expect brands to be socially responsible, the continued use of fur goes against a far more aware and wired population.
It’s as though some brands and some of our colleagues in the media believe they have the power or position to ignore public opinion.
There might be exceptions such as possum fur, the animals poisoned in the quest to protect ﬂora and fauna and to reverse humankind’s earlier decision in introducing a pest. But even that exception is too much for some animal rights’ advocates.
Of course we believe people must be gainfully employed, but those in the fur trade need to reposition themselves.
For every industry that falls foul of changing tastes, a new one arises. Opposition to them comes from those who feel it is too troubling to shift, usually within certain organizations that have become institutionalized.
I am reminded of the creator of the waterless urinal—not the most pleasant analogy, but the device is one that ultimately saves water.
The greatest opposition to the device, in the United States, has come from plumbers’ unions—though it’s possible for that industry to adapt. At some stage, the tipping-point will come and the two technologies will coexist for a time, before one becomes the victor.
Even at a personal level, my own father’s trade as an electronic technician became more or less obsolete as manufacturers put out cheaper goods—and parts that were often more expensive than the gadgets themselves.
He is in retirement age today, drawing his pension, but he only went into this trade when he retrained in his late 30s. His previous gig was a mail-order business which became reliant on American soldiers’ trade during the Vietnam War. It was too niche a customer base.
We all need to adapt, and we need to be reminded of these commercial lessons.
Many consumers are shifting from fur. Deﬁnitely not all, but among our readers there has always been a sizeable anti-fur group.
I’m one of those who dislike fur—that much has been reported elsewhere—and it has meant we’ve provided free promotion of animal rights’ and animal welfare organizations in our pages.
Faux and vintage fur, in our eyes, are perfectly acceptable alternatives in the twenty-ﬁrst century. The tipping-point may have already come, certainly among younger fashion consumers, which makes the continued advocacy of fur, and the hundreds of millions of animals killed for it, seem rather twentieth-century.—Jack Yan, Publisher

4 thoughts on “Fashion’s promotion of fur is provocative, in light of the tipping-point”