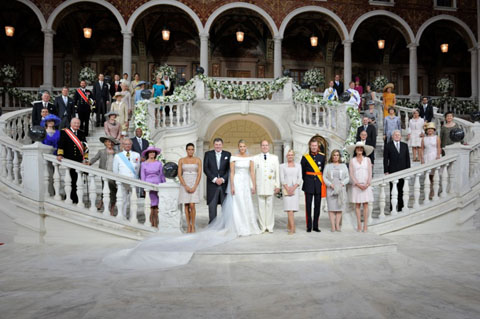 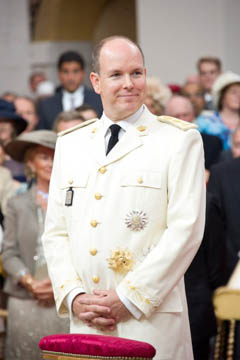 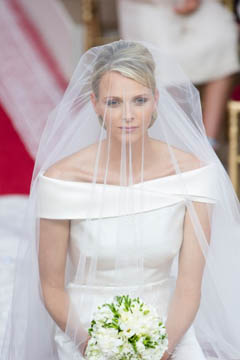 Above Ofﬁcial photographs from the Royal Wedding of Charlene Wittstock to HSH Prince Albert II of Monaco. The bride wore a Giorgio Armani-designed wedding dress with 40,000 Swarovski crystals.

Yesterday’s wedding of HSH Prince Albert II and Charlene Wittstock saw not just royalty attend—Sweden, notably, had a good turnout from the King and Queen, Princess Victoria and Prince Daniel, Princess Madeleine, and Prince Carl Philip—but a large number of celebrities.
Grimaldi family members, King Juan Carlos I, King Albert II, Prince Willem-Alexander, Crown Prince Frederik of Denmark and Prince Edward were among the royalty present.
Giorgio Armani, who designed the wedding gown, Karl Lagerfeld, Roberto Cavalli, Karolína Kurková, Naomi Campbell, Victoria Silvstedt, Sir Roger and Lady Moore, Rénée Fleming, Michelle Yeoh, with husband Jean Todt, and Inès de la Fressange rubbed shoulders with President Nicolas Sarkozy (who received applause on his arrival, though he was not accompanied by First Lady Carla Bruni-Sarkozy), Bernard Arnault, Mme Bernadette Chirac, the former French First Lady, and Prince Emmanuel de Svoie and his wife, actress Clothilde Coureau.
The bride wore a Giorgio Armani gown featuring 40,000 Swarovski crystals, 20,000 mother of pearl teardrops, 30,000 stones in gold shades. It took 2,500 hours to make, with the embroidery taking 700 hours, on to 130 m of off-white silk. The train was 6 m.
The groom wore a Monaco guards’ uniform, with three medals, including the Legion d’Honneur and the Ordre de Grimaldi.
After the religious ceremony at the Prince’s Palace, which included Holy Communion, the couple travelled in a hybrid Lexus landaulet to the church of Ste-Devoté in Monaco, where Princess Charlène put her bouquet. It may be the ﬁrst use of a hybrid vehicle by a royal couple at a major royal wedding.
The Princess looked far more relieved post-ceremony, though emotion hit her at the church and she shed some tears there.
Afterwards, the couple returned to the Prince’s Palace.
In accordance with the wishes of Prince Albert, who has been an environmental advocate, the entire ceremony’s carbon footprint will be calculated and offset.
Our publisher live-Tweeted from his personal account, hashtagging most entries #Monaco or #mariageprincier. Some notes appeared on our Facebook page during the ceremony as they came to hand.
Those who Tweeted about the gown in comparison with Kate Middleton’s generally did so in favour of Monaco.
It was observed that most Tweets were in French and Afrikaans, indicating that there was a sizeable audience for the Royal Wedding in Princess Charlene’s former home of South Africa, to where she moved when she was 12.
The ceremony was webcast on the Palace’s website, though with some discrepancies between image and sound, and live on Swedish national television’s website, SVT Play.
Princess Charlène wore another Armani dress at the reception, a white silk chiffon gown with an embroidered four-tier train.