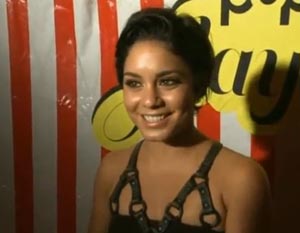 Sex and the City star Sarah Jessica Parker was one of the celebrities highlighting New York’s Fashion’s Night Out on Thursday evening—ﬁttingly at the Manolo Blahnik store on West 54th Street.
Parker launched a collection that she helped create alongside the designer.
She wasn’t alone in the proceedings: Vanessa Hudgens (left) was at PopChip, Anna Wintour, Estelle and Corinne Bailey Rae at Diane von Fürstenberg, and Daniel Radcliffe and Rose Hemingway at Columbia & Jeffrey New York.
Teen heartthrob Justin Bieber also headed out for Dolce & Gabbana, at that label’s store on Madison Avenue and 69th Street, in his ﬁrst Fashion’s Night Out appearance. He clariﬁed to the media that his girlfriend, Selena Gomez, does not give him fashion advice.