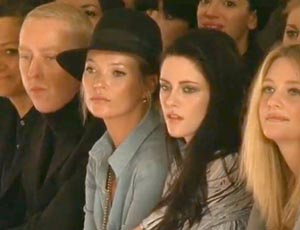 Day three was a day of celebrity-watching at London Fashion Week. Anna Wintour showed up at Nicole Farhi (who is interviewed below) and at Unique. Naomi Campbell, Ellie Goulding, Kelis, and Nicola Roberts also attended the latter. Goulding and Erin O’Connor appeared at Marios Schwab. Kate Moss, Eliza Doolittle, Olivia Palermo, and Kristen Stewart turned up at Mulberry, and Wintour and Sienna Miller attended Matthew Williamson’s spring–summer 2012 collection.
Williamson’s collection was notable for his prints and ﬂowing dresses, as well as his use of bright, tropical shades, continuing the voluminous and colourful trends for the spring. Mulberry, too, went colourful with lemon and pink, as well as complex prints and a good use of lace.
Doug Rimington has ﬁled some luscious photographs from London for days two and three, which we will showcase very soon. Meanwhile, enjoy the spring–summer 2012 videos from Mulberry, J. J. S. Lee, Margaret Howell, Richard Nicoll, Fashion East, Nicole Farhi, Peter Jensen, Unique, Marios Schwab, Unconditional, Matthew Williamson, and Paul Smith, plus a highlight reel from day three.