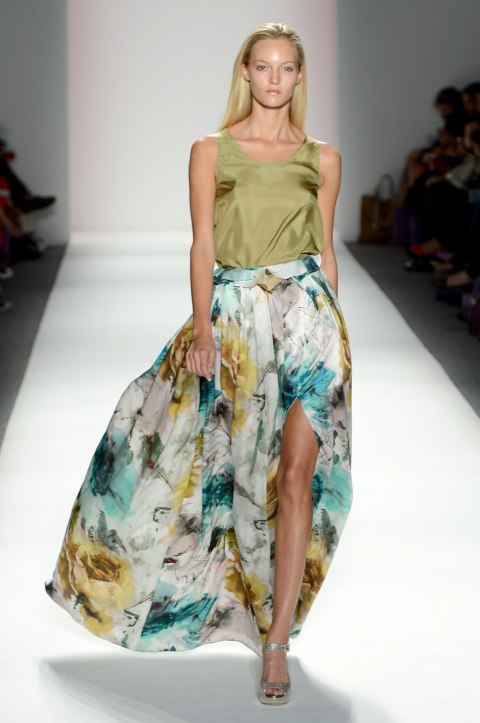 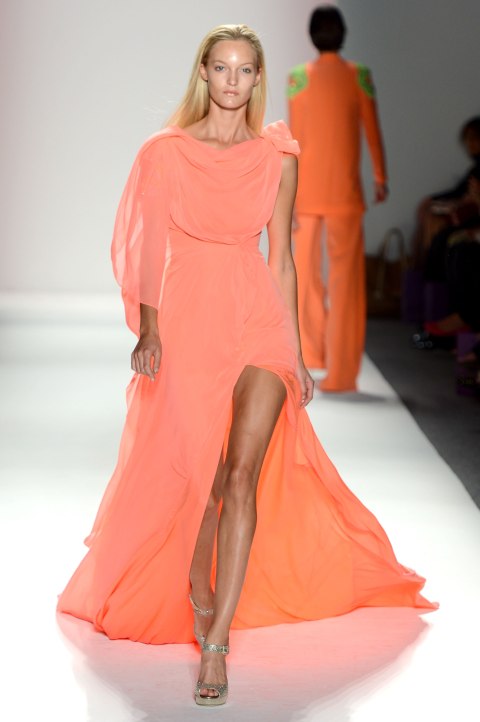 Above Noon by Noor, one of our favourites from day two, was effortlessly feminine.

For those on Twitter, you’ll have noticed that our Angela Gilltrap had ventured to the Concept Korea spring–summer 2013 presentation, with live Tweets coming from her. Below are the video highlights from the show, including Concept Korea, featuring Son Jung Wan, Lie Sang Bong, Kye, Choikoko, and Cres. E Dim.
Czar by Cesar Galindo gave day two a decent shot of colour blocking with gold, orange, purple, green and red—on the knowledge that depressing winters need to be ushered out by bright colours for spring. Noon by Noor, which hails from Bahrain (and was the first from the country to be on the official NYFW calendar), saw Olivia Palermo and Nicky Hilton among its front-row celebrities, and plenty of flowing silk chiffon dresses as well as biker jackets—it was one of our favourites as we came out of the show. If Monika Chiang was about ‘luxe athleticism’, then designers Noor Rashid Al Khalifa and Haya Mohammed Al Khalifa were aiming for ‘luxe utilitarian’, according to their notes. They were much more luscious and feminine than that. Meanwhile, W118 by Walter Baker was bright, eclectic and actually crossed seasons, with a youthful line featuring lace and geometric prints.
Charlotte Ronson took her inspiration from the ocean, with a light, casual feel, with a neutral colour palette of greys, blues and greens, all muted in a well edited collection. Netting, plastic, lace, and even plastic appeared among her materials, all with a classic and very wearable style.
Nicole Miller’s spring–summer 2013 style is easy wearing, with digital culture informing her prints (vertical stripes as one might see close-up on an LCD monitor, and kaleidoscopic patterns). The palette was restrained: grey, blue and black with occasional splashes through a multi-colour print; jacquard, leather, linen and beading were also seen on the runway.
Pamella Roland’s evening gowns and dresses stayed largely monochromatic (occasionally with yellow, pink and grey) and geometric, in a presentation paying tribute to Ellsworth Kelly. Roland’s spring collection was, again, timelessly designed, one that can easily transcend the spring–summer 2013 season.
Rebecca Minkoff’s tribute was to Slim Aarons, the American photographer who captured socialites in the 1960s. Minkoff took the jet-set look, adding a certain boyishness, with short shorts, flared pants, floral prints, and frills. 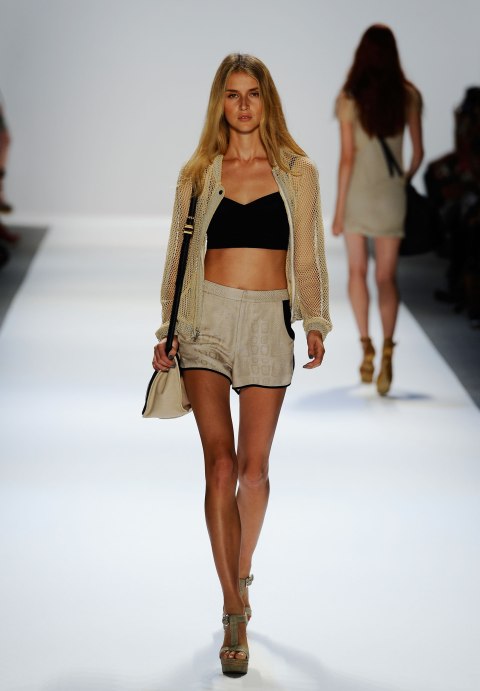 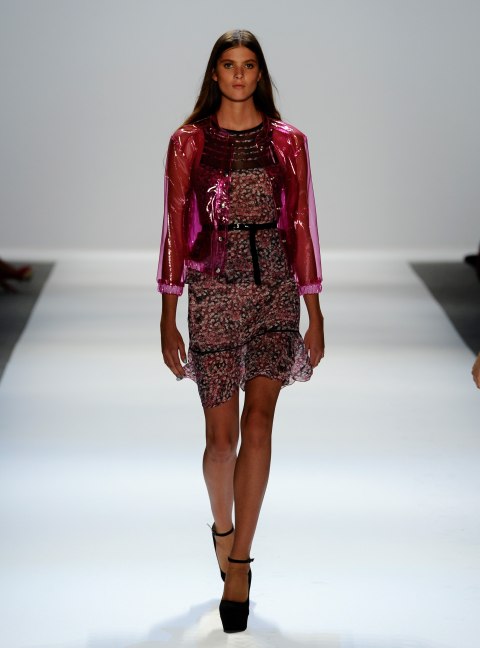 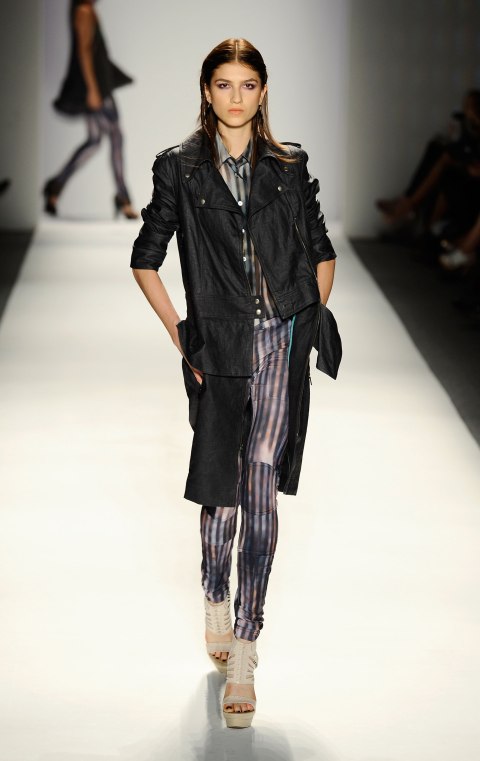 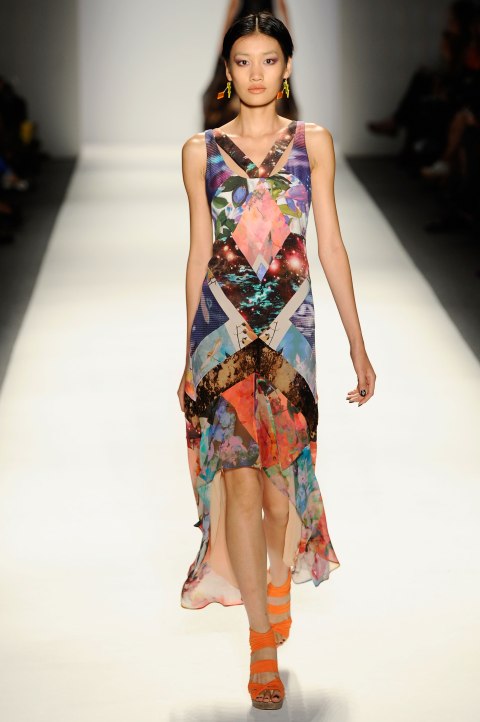 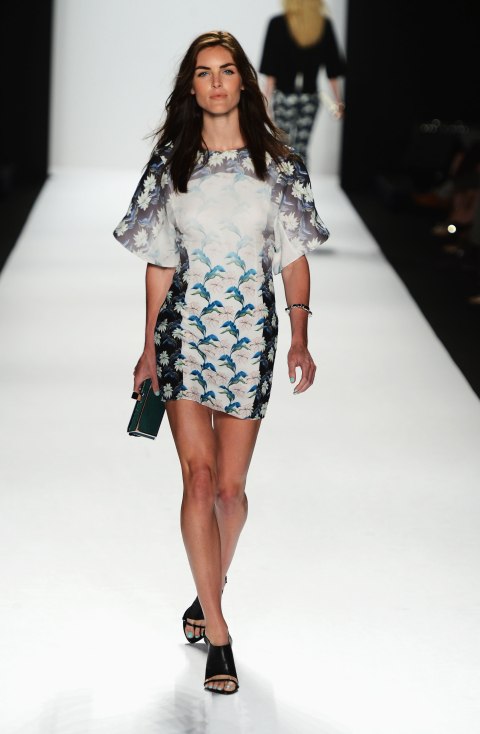 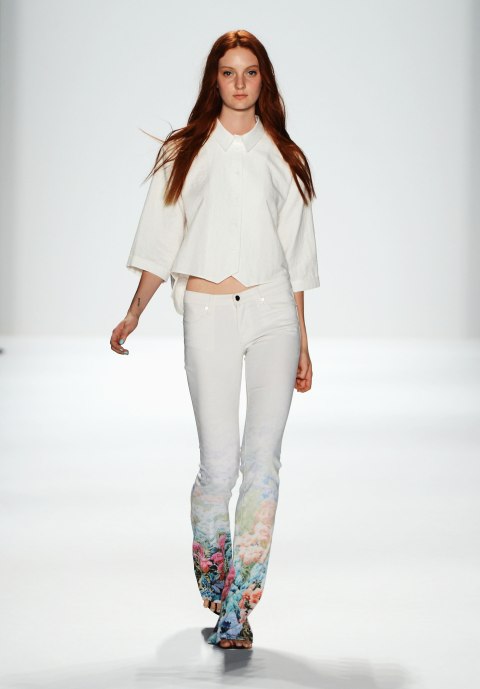