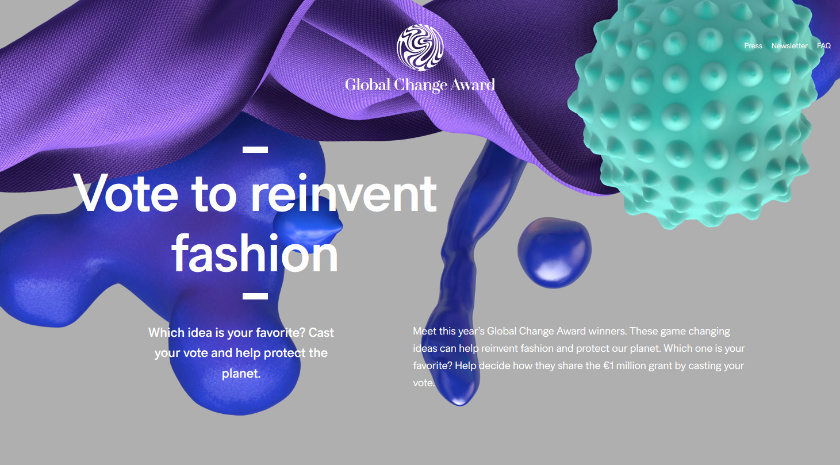 H&M Foundation invites the public to vote on the best ideas that can help revolutionize the fashion industry toward a sustainable, waste-free future.
Initiated in 2015, the competition is now on to its second round, with €1 million up for grabs between five winners. The vote, at globalchangeaward.com, closes on April 2. The public will determine how the €1 million will be split, with the top innovation receiving €300,000. All winners receive an innovation accelerator to help realize their ideas and get industry access.
The first of the 2016 five is a digital content thread that facilitates the recycling of clothes. By weaving an RFID thread with a digitalized ingredients’ list into the garment, recyclers will know what the garment is composed of.
There’s a carbon-binding nylon made from water, biomass and solar energy instead of oil. The nylon also binds greenouse gases into the material, to help with a zero-emissions world.
Third, a vegetal leather made from wine production waste helps with animal welfare, and eliminates the use of oil in making synthetic leather.
Fourth, old denim is broken down into particles, which are turned into a colouring powder to dye new denim, saving water and energy in production.
Finally, ‘manure couture’ takes the cellulose in cow manure and turns it into a biodegradable textile, reducing the release of methane gas and harmful substances.
The result will be announced at a ceremony at the Stockholm city hall on April 5.
‘The second round of Global Change Award received 2,883 innovative ideas from 130 countries, which is even more than last year. Cross-border challenges call for a cross-border approach. I am convinced that by bringing people from different industries, with different backgrounds and perspectives together we can make a fundamental shift, speeding up the transition to a circular waste-free fashion industry,’ said Karl-Johan Persson, CEO of Hennes & Mauritz. Fifty-six per cent of the innovations came from women.
The top five were chosen by an expert panel, comprising: Vikram Widge, had of climate and carbon finance at the World Bank Group; Rebecca Earley, professor in sustainable textile and fashion design at University of the Arts London; Amber Valletta, model, actress, entrepreneur and sustainability influencer; Ellis Rubinstein, president and CEO, New York Academy of Sciences; David Roberts, distinguished faculty, Singularity University; Lewis Perkins, president, Cradle to Cradle Products Innovation Institute; Johan L. Kuylenstierna, executive director for Stockholm Environment Institute; and Dame Ellen MacArthur, founder, Ellen MacArthur Foundation. The late Franca Sozzani, editor-in-chief, Vogue Italia, was an expert panel member in 2015 and 2016, but passed away before helping to select this year’s winners. All members participate pro bono.