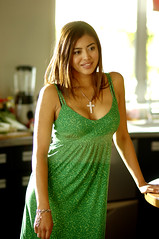 [Cross-posted] During my last trip to Auckland, I was telling a lot of people this: Ride with the Devil, premières TV2, September 4, 11 p.m.
This is a new TV show that stars my friend Caleigh Cheung, an occasional correspondent with Lucire. It’s her ﬁrst major role in a networked drama, I believe, but with this desire of New Zealanders to see themselves on screen in decent locally made dramas, why the heck is this scheduled at 11 p.m.? And what is on in prime time? My House My Castle? Fear Factor?
I am ﬁnally allowed to talk about the show and it is very indicative of modern New Zealand. Directly from the release (please excuse the strange capitalization of the title that seems to vary):

Ride With The Devil, (screening Tuesday nights, 11pm on TV2 from Sep 4th) is based around new-Asian youth Lin Jin (Andy Wong, Shortland Street) and the friendship he forms with bad-boy racer Kurt Williams (Xavier Horan, The Market). Written and directed by Murray Keane (Shortland Street, Outrageous Fortune) and produced by Rachel Jean (The Market) for Isola Productions, Ride with the Devil was made with money from the New Zealand On Air Innovation Initiative.

From a race point of view, it is the ﬁrst time that Chinese New Zealanders have been shown as regular Kiwis in principal roles. Even the United States has not managed to give the Chinese people that—the nearest it got was Margaret Cho’s sitcom about being Korean–American. The only other way Korean–Americans can get in to US media with any regularity is when a judge sues them for losing his pants.
There is some adult material, which does explain the later timeslot, but I understand that even 7 p.m. soaps like Shortland Street shows characters in sex scenes now. So why not 9 p.m. or 9.30 p.m.? Perhaps TVNZ will care to explain, but as an outsider (phew) I can say that it is once again symptomatic of the lazy and unimaginative management that is driving this country on to the rocks. Hang on—that was from another car thing.
Keane promises verisimilitude and that the stories have been taken from real life. Caleigh had shown me some of the pics taken on set (including her stuntmen—yes, men) 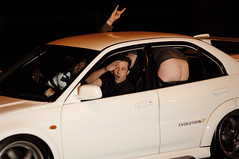 and it does show they have the rice burners (see left) properly souped up.
It also sees the return of Shortland Street’s Angela Bloomﬁeld.
I do hope this gets renewed for a second season even if it sounds like it mixes suburban Auckland with The Fast and the Furious, for it really does seem like a drama that will strike a chord in New Zealand. And my radar with trends is seldom wrong. I just tend to be ahead.
And if that still doesn’t work in getting viewers, I think the men and some women in this country will be rather impressed with our Cal, who tells me her character is rather chameleon-like. That is an euphemism for sexy.