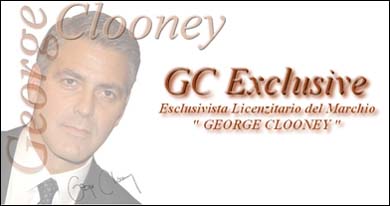 It had to happen sooner or later. Of all the celebs out there, George Clooney is particularly marketable, not just because of his looks, but because of his social activism. Thanks in part to his politician Dad Nick, the younger Mr Clooney is probably interested in more than acting.
At the Westin Palace in Milano next month, Clooney will be débuting his luxury fashion line for men and women (with clothing and accessories). The press release is not the best translated, but we gather he’ll be there. The line is called Style by George Clooney, we believe, and the company is GC Exclusive by George Clooney.
There’s a business card for the manager, Vincenzo Cannalire, at his site, featuring Mr Clooney’s image and not-very-luxury-brand web design, and an of?cial site at www.gc-exclusive.com in a similar style (above). If one assumes that if the actor has allowed his name to be used, this should be a reasonably good range.