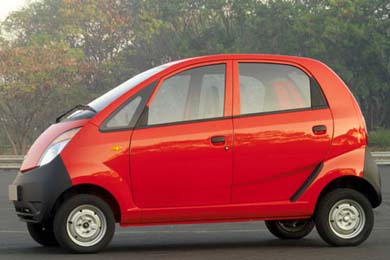 This morning at our New Zealand bureau, we received a news advisory about the launch of the Tata Nano in Mumbai today.
We expect to have coverage of the launch by this time tomorrow.
The Nano, which we covered excitedly in Lucire in January 2008, represents a positive step for the Indian motor industry.
Priced at Rs. 1 lakh, the Nano was conceived as a vehicle to safely transport Indian families, who may otherwise have opted for a motorcycle.
The way India has grown in the last few years, there is a huge automotive culture—and the Nano will contribute to that. The car meets emissions’ and safety requirements, according to Tata. And if it means lives will be saved because families have the protection of a car shell rather than the exposed nature of a motorcycle, then we support it.
But more importantly, we see potential for the Nano to go well beyond India. While export models to some countries would need more mod cons than the basic model—and Tata, from the beginning, stated its intentions to produce a deluxe model—it is a no-nonsense automobile that is being launched at a time when western models are getting heavier and, often, unnecessarily ostentatious.
It reminds us of the times when Volkswagen entered a North American market sick of excess—a situation that repeated when the Toyota Corolla and Honda Civic hit the same country in a land of oversized Buicks and Mercurys. It also reminds us of the mass mobilization that happened in Italy when the Fiat nuova 500—another “people’s car”—was launched in 1957 and the BMC Mini, which really took off in the 1960s. The latter was a classless car.
With Germany having had a horsepower war in recent years, and a growing green movement on the other end, the Tata Nano could be more a sign of one’s support of common-sense value.
While targeted at families who cannot afford a Maruti 800—considered till now one of India’s most affordable cars—Nano has a classless style to it that we believe could make a real statement in the west.
While it is still powered by the internal combustion engine, it could get 62 mpg (Imperial) from a 33 hp engine. That’s better than any Toyota Prius could do, by some 10 mpg.
With global fascination after the success of Slumdog Millionaire, this could well be India’s year. And Tata Nano could be the second phase of India’s 2009 rise, something which we observed as a trend that started over a decade ago. Incredible India indeed.