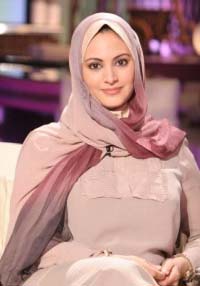 Muna Abu Sulayman is today announced as the winner of the Medinge Group’s 2010 Colin Morley Award, given to an individual who has contributed to the betterment of society through sustainable, socially responsible and humanistic behaviour. The award is part of Medinge’s annual Brands with a Conscience list, now in its seventh year.
‘It is a great honour,’ a delighted Muna Abu Sulayman remarked, when informed of the award last night by Simon Nicholls, of the Medinge Group, who made the nomination.
In giving this award, the Medinge Group recognizes Muna’s outstanding work in educational development, poverty alleviation and strategic philanthropy; as Executive Director of the Alwaleed Bin Talal Foundation, developing and implementing operations for humanitarian assistance across the globe; her role as the ﬁrst woman in Saudi Arabia to be appointed by the United Nations Development Programme as a Goodwill Ambassador; and for exceptional reporting as co-host on popular MBC-TV social programme Kalam Nawaem, in particular her advocacy of rights for women. As a public and media personality, she speaks about issues relating to Arab society, media, building bridges of understanding between east and west.
Since 1997, Ms Abu Sulayman has served as lecturer on American literature at King Saud University in Saudi Arabia. She frequently appears as a panellist at the Davos World Economic Forum, Jewish Economic Forum, C-100 of the World Economic Forum, Brookings Institute Conferences and other venues.
Medinge, an international collective of brand practitioners, meets annually in August at a secluded location outside Stockholm, Sweden, and collaborate on the list, judging nominees on principles of humanity and ethics, rather than ﬁnancial worth. The Brands with a Conscience list is shaped around criteria including evidence of the human implications of the brand and considering whether the brand takes risks in line with its beliefs. Evaluations are made based on reputation, self-representation, history, direct experience, contacts with individuals within the organizations, media and analysts and an assessment of the expressed values of sustainability.
Three years ago the group added a unique category commendation, the Colin Morley Award, recognizing exceptional achievement by an individual or NGO. Mr Morley, a member of the Medinge Group, died in the London Underground bombings on July 7, 2005. The award commemorates his visionary work in humanistic branding.