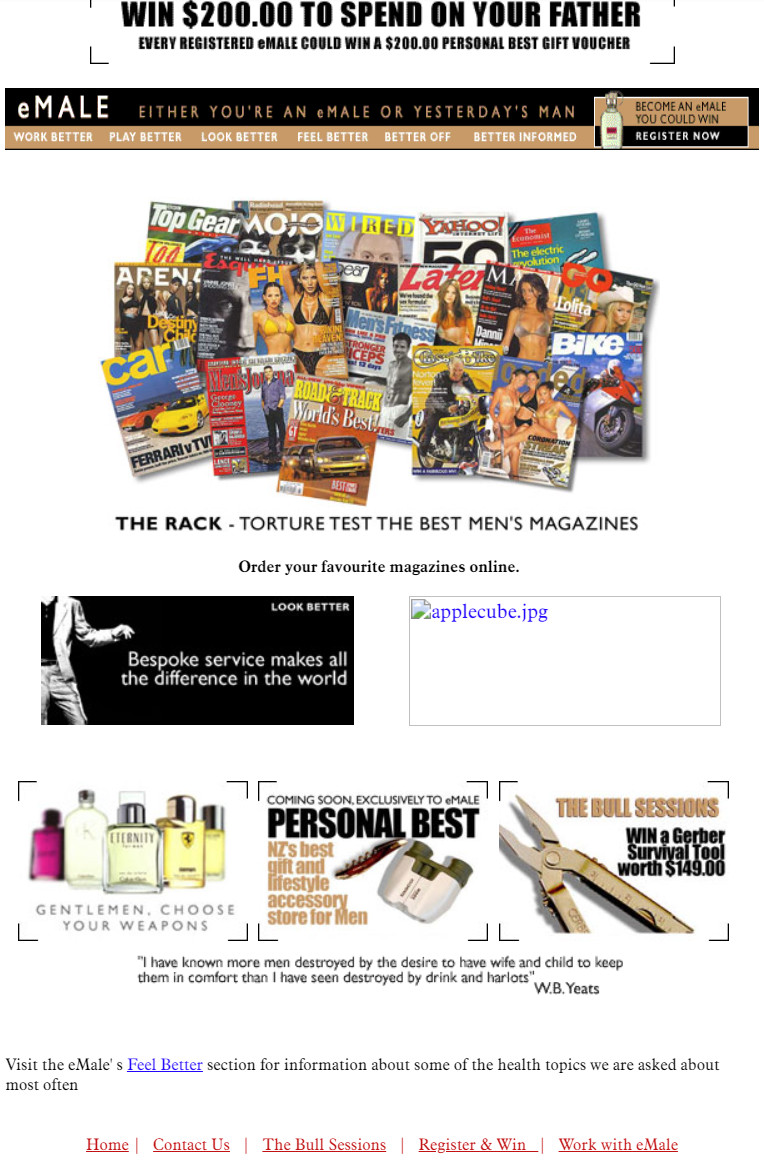 Above: A 2000 screenshot of Emale, created by David MacGregor.


I was very saddened to learn of the passing of my friend David MacGregor, with whom this magazine collaborated in the early 2000s. But David was much more than the creator of Emale (eMALE in its official form), New Zealand’s first online men’s lifestyle publication, which Lucire worked with at the turn of the century. Most New Zealanders will be familiar with the Family Health Diary commercial series once fronted by Judith Dobson—this was one of David’s creations. In print publishing, he created and co-founded the award-winning Idealog, which documented the creative economy, a subject which was very close and important to him. One of his connections to celebrity was he did the then-undiscovered Rachel Hunter’s first shoot in Glenfield, Auckland.

I came across Emale by chance: in those early days you always found some surprises through surfing the web. Here was this wonderful men’s interest publication on the internet done with a world-class professionalism: I knew whomever was behind this site had talent and experience. By this time David was already an old hand in the marketing and advertising worlds, having won his share of awards.

I reached out via Emale’s contact form suggesting we collaborate as I was so incredibly impressed with this site and how it looked. From there David and I became friends.

When I was going through the old Emale home pages on the Wayback Machine, I was reminded that I served as its motoring correspondent very briefly, probably an agreement that David and I reached to help each other as online lifestyle publishers. I know we sent visitors his way and I have a vague memory Lucire helped out on an Emale competition.

Regardless, Emale was one of the early forays in this country into men’s lifestyle publishing on the web, and David was there as a pioneer.

Idealog was a publication that had all the hallmarks that David was known for: professional, world-class, and aspirational: if you want your country to become a participant in the new economy, then why not have something that records its advance? It was perfectly timed as interest in the area began to grow: this was the heyday of Fast Company and New Zealand had a glossier, more art-directed approach to telling our stories.

A self-confessed motorcycle and Saab 900 (the original, natch) fan, David had exceptional taste and had been working on some stunning artwork of a Mercedes-Benz W180, and just last week created a design for a tattoo he wanted to get. He was a supporter of the Auckland politician Chlöe Swarbrick and backed her mayoral run. Going through his Facebook images—a lot of his artwork—you are reminded of just how uniquely talented David was.

I last saw David when he visited Wellington a few years back, looking through Unity Books, and I promised I would check out some old Saab 900s for him (and promptly did).

He had some personal issues he faced in more recent years, including depression, and from what I understand a pre-existing heart condition got the better of him as he headed out for a walk.

Tributes from the creative industry as well as from friends have been posted to his Facebook page, and I read a few on Twitter. He will be missed, and I hope he has found peace.—Jack Yan, Publisher