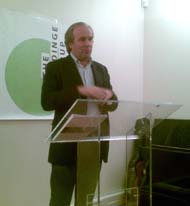 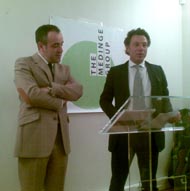 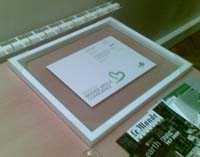 The Medinge Group had a slightly smaller Brands with a Conscience ceremony today at the Management Institute of Paris, reﬂecting the international nature of the winners. Many were scattered around the globe and unable to attend the ceremony, though two of the European winners made it to the French capital to collect their awards in person: Jean-Luc Colonna d’Istria of Merci and Pictet et Cie.’s Dominique Benoît.
Stanley Moss, CEO of the Medinge Group, noted that it was remarkable that in a year of ﬁnancial crises, there were two winners from that sector that were doing good. Apart from Pictet, the Co-op Bank received a Brands with a Conscience award.
The seventh annual awards’ programme also honoured Alibaba Group, Marks & Spencer (for its Plan A initiative), SAP and Selco Solar Pvt. Ltd. Muna Abu Sulayman won the Colin Morley Award and a letter from her was read out in absentia by Medinge member Simon Nicholls.
Medinge founder Thomas Gad noted that the Awards had become so successful that they had spawned at least one imitator.