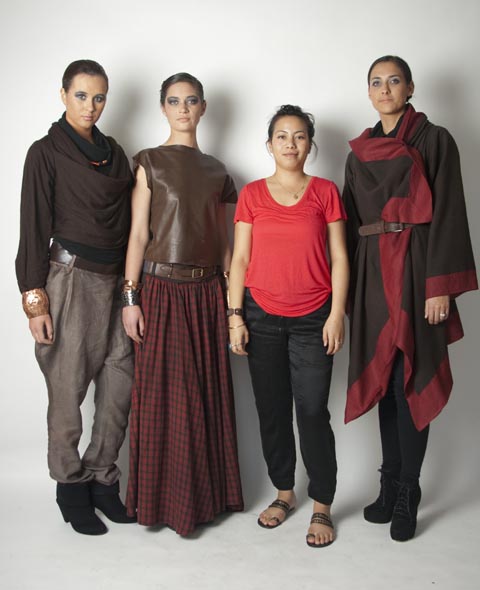 Last Saturday’s judging at Miromoda showed just how much better this competition is getting. It was the ﬁrst to attract an international entrant, and our winner, Adrienne Whitewood, has one of the strongest futures of any entrant who has entered the competition, in my opinion.
Adrienne’s Te Aho Tapu collection (above) demonstrated such growth from her 2010 entry—which came as high as second place on the judges’ radar then—that we felt very justiﬁed in awarding her Miromoda’s supreme award.
With Rex Turnbull, co-founder of the Miromoda awards, and Mapihi Opai of Fashion Industry New Zealand, we evaluated the 19 ﬁnal entries at Massey University’s Tea Garden, and look forward to seeing Adrienne and the category winners take their work to New Zealand Fashion Week in August.
Both Rex and I will mentor Adrienne in various aspects. Rex is playing host for her as she travels to Australian Fashion Week, while I intend to provide branding and marketing advice to prepare her for launch.
Dmonic Intent, made up of three sisters, Maxine Wooldridge, Samara Wooldridge and Khris Leach, earned ﬁrst place in the Couture section with their collection entitled Black Sheep.
They were also named runners-up in the Established section for their The Alchemist collection.
I have to add here that fashion editor Sopheak Seng picked Dmonic Intent as a label to watch some months back.
Tara Warren of Brisbane, and an AUT alumna, won the Emerging section with a menswear collection, Childhood Memories.
Kereama Taepa, a photographic tutor at Waiariki Polytechnic in Rotorua, used augmented reality to create a virtual life for his T-shirt designs, winning that section along with Tai Kerekere of Tawa, Wellington, whose wife, Rina, a former student of mine, also entered.
Ata Te Kanawa, who co-founded Miromoda with Rex, introduced the awards at the ceremony on Saturday evening, where Tohu Wines launched its Rewa méthode traditionelle wine.—Jack Yan, Publisher

One thought on “Adrienne Whitewood wins supreme award at Miromoda”