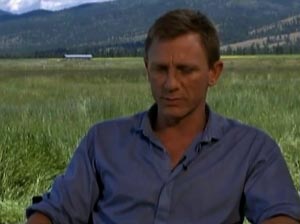 Daniel Craig and Harrison Ford offer comments on their new ﬁlm, Cowboys & Aliens, in ITN’s newest video below.
James Bond actor Craig says he had harboured a secret desire to play a cowboy.
Craig says he was pleasantly surprised to ﬁnd comedic elements, when he ﬁrst saw the script, while attempting to be an authentic western.
Ford found appeal in the way the movie blended human behaviour and ‘weird stuff’.
Cowboys & Aliens had its première at Comic-Con in San Diego last week. The ﬁlm, set in Arizona in 1873, has been adapted from a graphic novel. It will have its UK release on August 17.